I’m in Paris on a magazine assignment, which is exactly as great as it sounds. I eat dinner at a restaurant so fancy I have to keep resisting the urge to drop my fork just to see how fast someone will pick it up. I’m drinking cognac—the booze of kings and rap stars—and I love how the snifter sinks between the crooks of my fingers, amber liquid sloshing up the sides as I move it in a figure eight. Like swirling the ocean in the palm of my hand.

Somewhere near midnight, I tumble into a cab with my friend and the night starts to stutter and skip. She leans into me, the bundle of scarf around her face. It’s cold, and we are squished together on the vinyl seat, too lit to care about the intimacy of our limbs. The streets are a smear through the window. The taxi meter, a red blur. How did we get back so fast? A second ago, we were laughing in the cab. And now, I’m standing on the street alone.

I walk through the front door of my hotel, into the bright squint of the lobby. My heels clickety-clak across the whitestone. It’s that time of night when every floor has a banana peel, and if I’m not careful, I might find my face against the ground, my hands braced beside me, and I’ll have to explain to the concierge how clumsy and hilarious I am. So I walk with a vigilance I hope doesn’t show.

I exchange a few pleasantries with the concierge, a bit of theater to prove I’m not too drunk, and I’m proud of how steady my voice sounds. I don’t want him thinking I’m just another American girl wasted in Paris. The last thing I hear is my heels, steady as a metronome, echoing through the lobby. And then, there is nothing. Not a goddamn thing.

This happens to me sometimes. A curtain falling in the middle of the act, leaving minutes and sometimes hours in the dark. But anyone watching me wouldn’t notice. They’d simply see a woman on her way to somewhere else, with no idea her memory just snapped in half.

It’s possible you don’t know what I’m talking about. Maybe you’re a moderate drinker, who baby-sips two glasses of wine and leaves every party at a reasonable hour. Maybe you’re one of those lucky fellows who can slurp your whiskey all after- noon and never disappear into the drink. But if you’re like me, you know the thunderbolt of waking up to discover a blank space where pivotal scenes should be. My evenings come with trapdoors.

I don’t know how much time I lose in this darkness. Or what takes place. When the curtain lifts again, this is what I see.

There is a bed, and I’m on it. The lights are low. Sheets are wrapped around my ankles, soft and cool against my skin. I’m on top of a guy I’ve never seen before, and we’re having sex.

Hold on. Can this be right? I’m having sex with a man, and I’ve never seen him before. It’s like the universe dropped me into someone else’s body. Into someone else’s life. But I seem to be enjoying it. I’m making all the right sounds.

The guy isn’t bad-looking. Slightly balding, but he has kind eyes. They glisten in the low light. And I think, whoever picked up this man, she did an OK job.

“You really know how to wear a guy out,” he says. I trace a knuckle down the side of his face. It seems unfair that he should know me, and I don’t know him, but I’m unsure of the etiquette. Excuse me, but who are you, and why are we fucking?

He gives an annoyed laugh. “You just said you wanted to stay.”

So I stay with the stranger in the shadows of a room I do not recognize, looking out onto a city that is not my home. The window stretches across the wall, and I stare at the twinkling lights. I smooth my hand along his chest. It seems like the polite thing to do. He strokes my hair, and brings my hand to his lips, and if anyone were watching us, we would look like two people in love.

A blackout is the untangling of a mystery. It’s detective work on your own life. A blackout is: What happened last night? Who are you, and why are we fucking?

How did I get here?

“You don’t need to be a reformed problem drinker to appreciate Hepola’s gripping memoir about the years she lost to alcohol-and the self she rediscovered once she quit.”
— People, “Summer’s Best Books”

“Alcohol was the fuel of choice during Hepola’s early years as a writer, but after too many nights spent falling down staircases, sleeping with men she didn’t remember the next day, and narrowly surviving countless other near disasters, she fought her way clear of addiction and dared to face life without a drink in hand.”
— O Magazine, “The Season’s Best Biographies and Memoirs”

“It’s hard to think of another memoir that burrows inside an addict’s brain like this one does.”
— Entertainment Weekly (grade: A)

“Wry, spirited. . . . Hepola avoids the tropes of the ‘getting sober’ confessional and takes us into unexplored territory, revealing what it’s like to begin again — and actually like the person you see in the mirror.”
— MORE Magazine

“Hepola is an enchanting storyteller who writes in a chummy voice. She’s that smart, witty friend you want to have dinner with. . . . Like Caroline Knapp’s powerful 1996 memoir ‘Drinking: A Love Story,’ BLACKOUT is not preachy or predictable: It’s an insightful, subtly inspiring reflection by a woman who came undone and learned the very hard way how to put herself back together.”
— Washington Post

“A memoir that’s good and true is a work of art that stands the literary test of time and also serves a purpose in the present. It mines intimate, personal experiences to raise bigger questions, tell a bigger story, help readers understand themselves, their circumstances, their world. Like the best sermon, the best memoir comforts the disturbed and disturbs the comfortable. This rare bird is the Southern belle of literature: forceful, punctilious, beautiful. BLACKOUT, the debut memoir by Salon editor Sarah Hepola, is one such memoir. It’s as lyrically written as a literary novel, as tightly wound as a thriller, as well-researched as a work of investigative journalism, and as impossible to put down as, well, a cold beer on a hot day.”
— Chicago Tribune

“Hepola refuses to uncomplicate the complicated, one of her memoir’s greatest strengths. Yes, we see the familiar recovery story arc — I drank too much, I hit bottom, I found AA — but with it comes a deep dive into the shame, fear and perfectionism that tilt so many women toward defiant self-destruction with the goal of annihilating the confused flawed self to emerge different, better. Invincible. Reflecting on the fantasies that suffused her drinking years, a newly sober Hepola comes to see that they ‘all had one thing in common: I was always someone else in them.’”
— Los Angeles Times

“This is a must-read for recovering addicts; for women susceptible to the glamour of being modern and independent; for anyone who has had a difficult past, and who wants to heal, but who wants mostly to laugh at themselves. Basically, we should all be reading BLACKOUT this summer (and wishing the incredibly smart and candid Hepola was our BFF).”
— Bustle

“Alcoholism is a difficult subject to tackle, but Sarah Hepola does so with grace and candor in this memoir about her own struggle with addiction. . . . Captivating and inspiring.”
— Bookish

“The writing is incredibly smart and maintains a level of intensity you don’t often find in long-form memoirs….BLACKOUT is an enthralling interrogation of a life. Even the most banal moments are beautiful, elevated, and resonate across the human experience.”
— The Rumpus

“A razor-sharp memoir that reveals the woman behind the wine glass. . . . Modern, raw, and painfully real-and even hilarious. As much as readers will cry over the author’s boozy misadventures-bruising falls down marble staircases, grim encounters with strangers in hotel rooms, entire evenings’ escapades missing from memory-they will laugh as Hepola laughs at herself, at the wrongheaded logic of the active alcoholic who rationalizes it all as an excuse for one more drink. . . . Hepola moves beyond the analysis of her addiction, making this the story of every woman’s fight to be seen for who she really is. . . . Her honesty, and her ultimate success, will inspire anyone who knows a change is needed but thinks it may be impossible. A treasure trove of hard truths mined from a life soaked in booze.”
— Kirkus Reviews, starred review

“Her true bravery emerges in this memoir’s witty candor. . . . her own sobriety is as funny and fearless as her drinking days. . . . A rollicking and raw account of binge-drinking, blacking out and getting sober.”
— BookPage

“The story of a rising star’s journey of self-destruction and realization, BLACKOUT is gripping, alternately excruciating and funny, scary and hopeful, and beautifully written. I loved it.”
— Anne Lamott, author of SMALL VICTORIES and TRAVELING MERCIES

“Sarah Hepola is my favorite kind of memoirist. She is a reporter with a poet’s instincts, an anthropologist of her own soul. BLACKOUT is a book about drinking and eventual sobriety, but it’s also an exploration of the fleeting nature of the comfort we all constantly seek — comfort with the self, with others, with the whole maddening, confusing, exhilarating world. What’s more, Hepola’s ability to bring such precise and evocative life to the blank spaces that were her drinking blackouts is downright stunning in places. I admire this book tremendously.”
— Meghan Daum, author of THE UNSPEAKABLE: AND OTHER SUBJECTS OF DISCUSSION

“This is a book about welcoming yourself back from a long absence. It’s a memoir, but its author is not its main character; she is a new person sprung from the ashes of another one whose alcoholic self-erasure she describes with painful honesty and charming humor. A book about freedom that will help set others free as well.”
— Walter Kirn, author of BLOOD WILL OUT and UP IN THE AIR

“Sarah Hepola’s BLACKOUT is the best kind of memoir: fiercely funny, full of hard-won wisdom, marked by a writer with phenomenal gifts of observation and insight. The book engages universal questions — Where do I belong? What fulfills me? — that will engage any reader.”
— Emily Rapp, author of THE STILL POINT OF THE TURNING WORLD 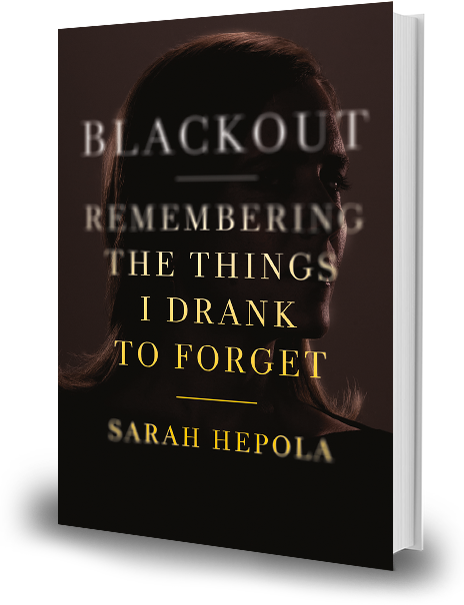 You can purchase Blackout: Remembering The Things I Drank To Forget by clicking any of the following links: