On a blustery Saturday, I decided to bake bread. It was 10:30am, and I had never done such a thing before, but I imagined myself in the kitchen kneading the pale powdery squish of the dough with my hands, folding toward and pushing away. I’d recently bought a recipe book from an old hippie commune where the author described home bread-making as a sensuous activity, a spiritual activity. “Something inside felt met,” he wrote about kneading dough for the first time. It was eight months into the pandemic. Something inside me had not been met for a long time.

I headed to Whole Foods with a neon orange sticky note listing my ingredients, but they were out of yeast. Right. Everyone was baking bread, didn’t I know? Bread, guns, hair dye, puzzles. The pandemic revealed curious impulses in the American appetite. I texted my mother about the yeast, because I could also use a loaf pan. “Come on over,” she said.

My mother baked bread when I was little girl. I remember standing on a stepping stool beside her in our small kitchen, index finger hooking a dollop of dough to sneak into my mouth when she wasn’t looking. My mother was a creature of the late Seventies: No makeup, slick raven hair down her back, brown clogs, none of the flash I saw on the other mothers in my Dallas school, the gobstopper jewelry, the full-length minks, the shimmery lavender and blue eye shadows, the stamp of Eighties Dallas. She belonged to a food co-op, and didn’t allow sugared cereal in our house, and the older I got, the more I became embarrassed by these differences in her, in us. Like the bread. In the school cafeteria, my thick homemade slice of wheat fell apart when I took a bite as the other kids chewed their highly tamed WonderBread. “White bread” would become a dismissive term for places like the one where I grew up, affluent and blandly conformist, but white bread was exotic to me. I became fascinated with the stuff. No child ever took the name WonderBread so literally. What would it taste like? Who would I be?  At friends’ houses, where I indulged in Oreos and Spaghetti-Os, I liked to squeeze a slice of white bread into a tight ball and eat it like an apple.

My mother stopped baking bread somewhere in my elementary years. She was getting her therapy degree, and work kept her out of the house in the evenings, and she grew tired of fighting with two children who saw healthy home cooking as a level of Dante’s hell. My father began making our dinners, and processed items like Hamburger Helper and Kraft Macaroni and Cheese appeared in the cabinets, and my mother experienced this as one of the sinking stones of motherhood and my brother and I experienced this as victory. Like getting a snow day. But something else happened when my father took over our meals. The family began eating separately. My father watching the evening news, my brother in front of his computer, and me in my bedroom, held captive by the cathode ray of the old television, pretty boys and glamorous women. The dining room became the least used room in our house, cold and drafty, a corridor you walked through to get somewhere else.

By middle school, I was always on a diet. Food was not sustenance then, but battleground. Through high school, I ate Lean Cuisines and rice cakes and plain bagels with light cream cheese. I never learned my way around the kitchen, but by the end of college, I knew my way around a liquor store. At potluck dinners, I brought booze. I became fluent in whiskey and wine, but what I loved most was beer. That yeasty fizz was like home to me. It’s only now, writing this, that I wonder if the luscious smell of bread baking in my childhood had any connection to the sips of malty beer I started stealing from the fridge in those early years when my mother was not around, the beer that became my stoutest comfort. Of course lushes know there isn’t one reason you fall in love with alcohol; there are a thousand. But I can tell you that when I was drinking, something inside felt met.

I drive over to my parents’ place, where my folks have been diligently sheltering in place for the better part of a year, and my mother loads me up for my adventure. She hands me yeast parceled into a mini-Tupperware container, which I shake like a maraca next to my ear. She hands me a heavy loaf pan splotchy with use. My mother began baking again in my college years. She had more time, and I would tell her I missed the smell. It summoned a softer time for me. She offered to teach me back then, her own conditioning dictated that women should learn to cook and bake for their husbands, but I brushed aside the offer, confident that love would be different for me. My boyfriends were the Anthony Bourdain types, and I was the Hemingway type, and a woman didn’t need those skills anymore. But of course that didn’t mean a woman wouldn’t enjoy such skills. That was the part I missed, stranded between defiance and obligation. That baking and cooking were not necessarily acts of subservience, but ones of mastery, acts of creation, of summoning, a love plated and shared. I missed how mediative and sensuous and connecting it can be. Not long ago I asked a male friend why he’d taken up cooking in middle age, and as he turned a steak with tongs, he said, “Because it’s so pleasurable,” and I thought what a difference it makes when we choose a skill, instead of that skill being thrust upon us.

It’s nearly 3pm when I get back to my own kitchen. I listen to a podcast as I measure out the ingredients. Sugar, flour, yeast, water. That’s it? The cat slinks a figure 8 around my shins, because I’m standing near his snacks, and he’s getting ideas. “Sorry buddy,” I say, briefly burying my hand in his luxurious gray fur before returning to the counter. I level off the measuring cup, and the powder of the flour feels cool against my fingertips. I click the whisks into the hand mixer and watch the flour puff into the air when I switch it on. It’s funny how I used to think WonderBread was magic, frozen dinners and fast food were magic, but now I understand the real magic. That thousands of years ago in Egypt (I think?), some clever so-and-so discovered that yeast could rise. That these simple ingredients could make food.

I knead the dough for ten minutes. No idea if I’m doing this right, but how wrong could I be? The kneading feels psychologically meaningful, like an act of therapy done with my hands. Afterward, I place an oil-slicked ball of dough in a bowl with a towel draped over it, the way my mother used to, and something about the draping towel always brought to mind a prizefighter in the corner of the ring. Like Rocky, squirting water into his bloodied mouth. You can do it, Rocky. This is what I envision when a ball of dough gets set aside for an hour. The drama of trying to rise again.

I think it was around 2000 when everyone turned against bread, when carbs had became the enemy. “Carbs!” women would say, making the sign of the cross like the devil was near. The Atkins diet exploded, then South Beach, fads that phased into paleo and keto, all of which operated on a low-carb philosophy.  “No bread,” people told servers at restaurants, where endless baskets of Focaccia and sourdough had been one of the great boons of dining out. The market introduced bunless burgers, lettuce wraps, protein bowls, cauliflower pizza dough. I absorbed this logic so thoroughly that I could not tell you the last time I bought a bag of old-fashioned sandwich bread, but it made me sad to watch a culture turn on bread — on bread, the foundational food. It was like turning on apple pie.

I uncloak my pale puff of dough after an hour — it has risen! — and the next step is punching the dough. Oooh I’ve been looking forward to this part. I pummel the ball with my fists like a punching bag. I’m really going to town. I’m not sure how long to keep this up, so I look it up on Google and find the following. “Although this process is called punching the dough, do not actually punch the dough. Yeast is a living thing.” Dammit. I return to the dough, stroking its surface, which now has knuckle imprints. “I’m so sorry,” I tell the dough. One day, I’ll become a grown-up who reads the directions, but for now, I insist on learning as I go. I start to work the dough daintily with my fingertips, feeling air bubbles pop between my fingers like plastic wrap. I knead the ball again on the countertop. Knead, from the proto-Germanic kneden. The word need is also Germanic, from ned or neod. but it was only in modern English that the words became homonyms. To knead bread sounded the same as to need bread, which are both true for me right now, and as my fingers work the dough, I do in fact find: Something inside me feels met.

I dated a man who teased me about how much I liked touch. “You’re freaky,” he said one afternoon, as I drizzled my fingers over his skin, and I pushed myself up on my elbow and said, “What do you mean freaky?” And he said, “Like how some people want their toes sucked. That’s how you are with touch.” I found it odd that he had equated a mundane and natural act (touch) with a rather eccentric one (the suckling of toes, no judgment, but come on). His family lived on the other side of the globe, he had been away from his mother for the better part of a decade, and I thought perhaps he was cut off in ways he had not articulated. I think this is true of most of us. Even before the pandemic, I would often have this stray thought: We have lost touch.

“Touch is the one thing we can’t manufacture,” I told him. So much of modernity was a good simulation. The machines, the screens, the automated voice on the other end of the line, the porn, the vibrators, we had so many devices to create pleasure, distraction, communication — but none replaced touch. The feel of another person’s touch was so nourishing, and probably one reason he and I didn’t work out was that he didn’t understand this. A man’s touch has enormous power. Men tend to think of power as aggression, force — thrust, grapple, crush, the strong action verbs — but you can make a woman tremble with a feather stroke. Like music, touch requires dynamics.

My bread was done at 6pm, just in time for dinner. Lightly golden-brown on top, a nice solid loaf, and a warm sense of accomplishment. I did this. I sliced off a hunk that thumped onto the counter and twirled steam into the air. Two pats of butter on top, then honey poured into the sponge of the bread, and the sweet syrup dripped through my fingers as I sat, alone in my kitchen. Eight months into the pandemic, and numbers were starting to rise again, and nobody knew how long this would last. I ate one slice, and then another.

It wasn’t the best bread I’d ever eaten, but it was a good start. 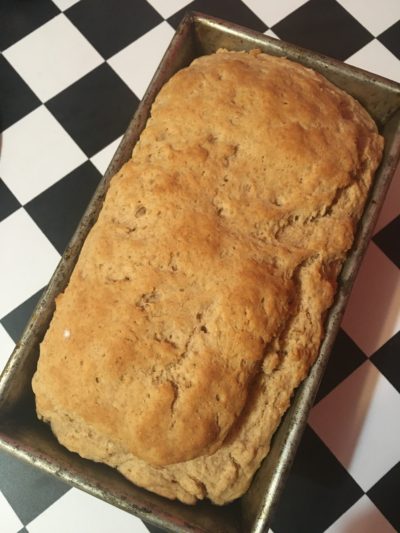