In October, I loaded up my red Honda and drove out west for two months. A tent, a Coleman stove, a guitar, and zip-up high-heel boots. I wanted to soak up both city and country, the spectacular hush of a canyon in the pre-dawn, and the gaudy 10pm bustle of Las Vegas. I had every intention of blogging this trip. I even had a first entry, which began:

Perhaps every road trip begins with a fantasy. 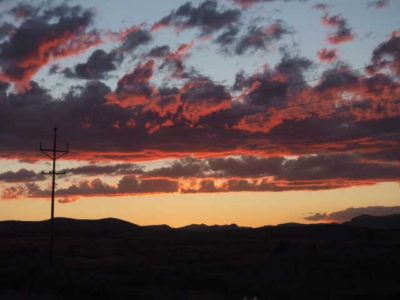 But I blogged nothing. Weeks went by: Austin turned to West Texas and then New Mexico, and I had this strange urge — or journalistic curiosity, or perverse longing — to see what might happen if I did not share a word. If I kept the whole experience to myself.

So much of life is lived online. We all know this — what a performance our existence can be. The Facebook status update meant to elicit clicks of admiration. The Instagram feed of artsy angles and flattering snapshots. Sometimes, I go to Twitter, and watch the river of article links from better-read friends, and think about how much in the world I will never know. And I have not been the first to wonder: What happens if I just opt out? I was becoming more private in real life. As the publication date of my memoir grew closer, I felt an uncharacteristic urge to retreat. Perhaps it was some attempt at equilibrium. The more I shared about myself professionally, the less I wanted to in real life. 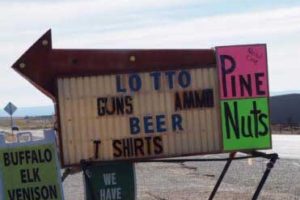 I had blogged a road trip once, at 27, and I still thought about that time like an ex-boyfriend I could never quite get over. The astonishing freedom. Throughout the spring — as I struggled through the gruesome final edits of my book and let go of a cat who had lasted as long as he possibly could — my mind would turn toward a road trip. I deserved some kind of adventure, right? I had turned 40. I had filed 240-ish pages of prose. And my house had grown so still. Some nights when I came home, my eyes filled with tears before I even opened the door, because I knew no furry creature was breathing behind it.

And so I left. When you have no pet, no husband, no kids, and a part-time job that allows for mobility, leaving is extremely easy. Santa Fe turned to central Arizona, where cell signals go to die. I had entered the iffy-wifi zone of the Southwest. I wrote in an old journal at my little campsite, perched at the lip of the Grand Canyon’s North Rim, and I began to remember how good it felt to spill words that no one would see. Nothing was a performance. It was mine, all mine. I never worried if some stranger liked what I had written that morning, because no stranger ever saw it. I took long hikes into the canyon, ate salty trail mix, and listened to “Serial” podcasts. I took selfies I never sent to anyone. Some days were divine. 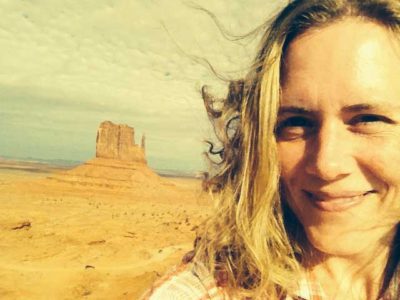 Others were not. I was still working for Salon during this swath of time, which meant devoting two and a half work days a week to edit personal essays, read submissions, approve art. This was, to put it mildly, challenging. I chased wifi signals around campsites like a gnat you cannot swat. It was supremely frustrating. I felt like I was failing at my job, but I also felt I was failing on my trip. Never fully detached. Never fully in it. It’s as though I were on the lip of civilization, too — too far for anyone to hear my voice, but close enough that I could see them and think about them all the time.

So here is what happened, as the Grand Canyon turned into Bryce Canyon and a crowded campsite at Zion National Park, where I fell asleep on the cold ground listening to people at neighboring campsites get drunk: I grew profoundly lonely. Lonely and depressed, though it was hard to tease out either emotion because they became a big blob of self-pity that followed me around. I stopped writing. I stopped communicating with friends for the most part. I did not feel free. I felt very, very marooned. Something shut down in me. I took long drives with no music, no sound. A big stack of books in the back seat remained unread. The guitar did not come out of its case for weeks. My mother texted me every night, and I was so grateful for the joyful noise of that double beep. 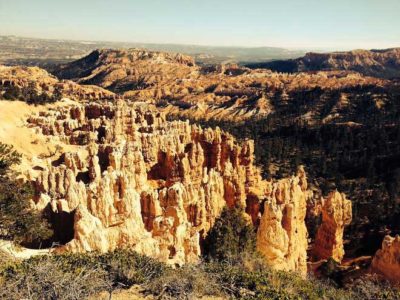 I couldn’t figure out why this road trip felt so raw, and disappointing, when the first had been so great. Was I remembering it wrong? Had my expectations simply been too high? Perhaps it had been a mistake, to retreat from the world when I needed the world more than ever.

“Isn’t this what you went into the wilderness for?” a friend asked, during a rare phone conversation. “To battle with yourself?”

I guess. I just thought battling with myself would be a little more … fun? On that road trip 13 years ago, I remember this time I pulled into the Athens library, tired and beat down, and checked my email only to find a message from a stranger who had been reading my blog. I hear you’re in Athens. Here are some places to check out. It was so kind, so freaking cool. I wasn’t sure what I had been trying to prove, doing this whole trip alone, in the void. There is a difference between loneliness and solitude. One hurts much, much worse.

I began to remember another benefit of blogging on that trip: I did things I wouldn’t normally do, because I wanted to write about them. Visiting some tourist attraction out of my way, talking with some eccentric passerby. I would think: This will make a good story. And when bad things happened, I converted the pain into copy very fast: This will make a good story, too. You could say it was a performance. But you could also say that we are often better when we are accountable to each other. The way my room is much neater when someone is coming over. It’s hard to be your best self in an information vacuum. 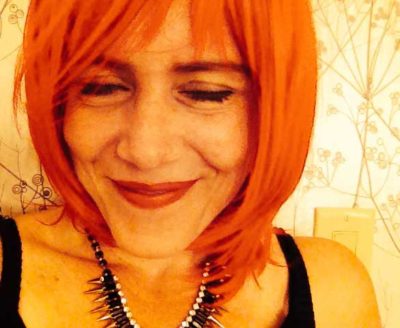 Las Vegas became Los Angeles became San Francisco, and the loneliness receded, because I began to spend time with friends, laughing about my melodramatic sadness in the woods and the misadventures of camp grounds and California Airbnbs. It took three days and 26 hours to drive back to Dallas — a monotonous trip across the Mojave and through a New Mexico dust storm — and each night, I sat in another shitty roadside hotel and promised myself I would write but I mostly watched “Shark Tank,” which was being played ad infinitum on CNBC that week. I stopped thinking of the television as an entertainment device, and I started thinking of it as a “Shark Tank” delivery system.

I arrived home on the day before Thanksgiving. I felt defeated and way too excited about my duvet. “I can’t wait to hear about your trip!” friends said, but when we got together, I tried to direct the conversation to other topics, because I was tired of lingering in this blue valley and I almost felt like I’d failed them, too. Mine was not a hero’s journey but another tale of woe. I had an iPhone and a digital camera full of pictures — grassy meadows and unfolding deserts and empty beaches — and I didn’t want to look at any of it. I promised people I’d put it all online, a way to share the experience with friends, and I never did. I kind of forgot all about it. 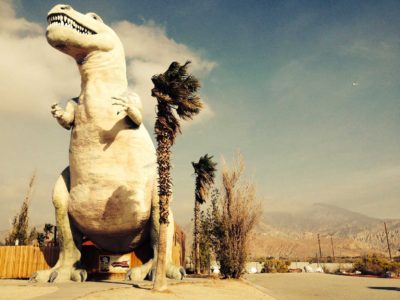 More than two months have passed since I returned, and my life once again has a very small radius. I wake up, and write in my bed, and eat in my kitchen, and sometimes I go to yoga, or a coffee shop, or a friend’s house. Every once in a while, I stumble past two bags in my office, which are still waiting to be unpacked. They contain wrinkled maps folded incorrectly, and one of those long campfire lighters, and the Splenda I insisted on using in my morning coffee. I’m not sure why I can’t unpack them. Maybe because I’m lazy. Or maybe because as much as I longed for it to be over, I’m not ready to move on from that trip yet.

I think about that campsite on the Grand Canyon sometimes. It was so quiet there. I had not adjusted to the time change yet, so I would wake at 6am, when it was still freezing and dark, and I would brew a cup on my little camping stove while listening to music on my iPhone, and wander out to a big white rock that looked like a giant hipbone, where I sat and wrote as the sun came up. This was no small thing: To watch the sun rise over the Grand Canyon. The bird noises and the wind rattling through the aspen. I knew I’d miss it after I was gone. I was right. 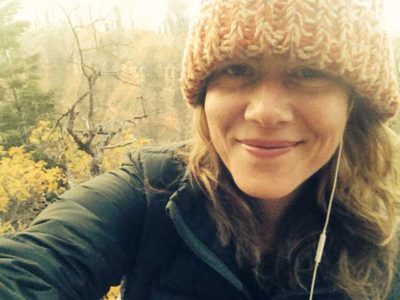 My morning perch on the lip of the Grand Canyon.