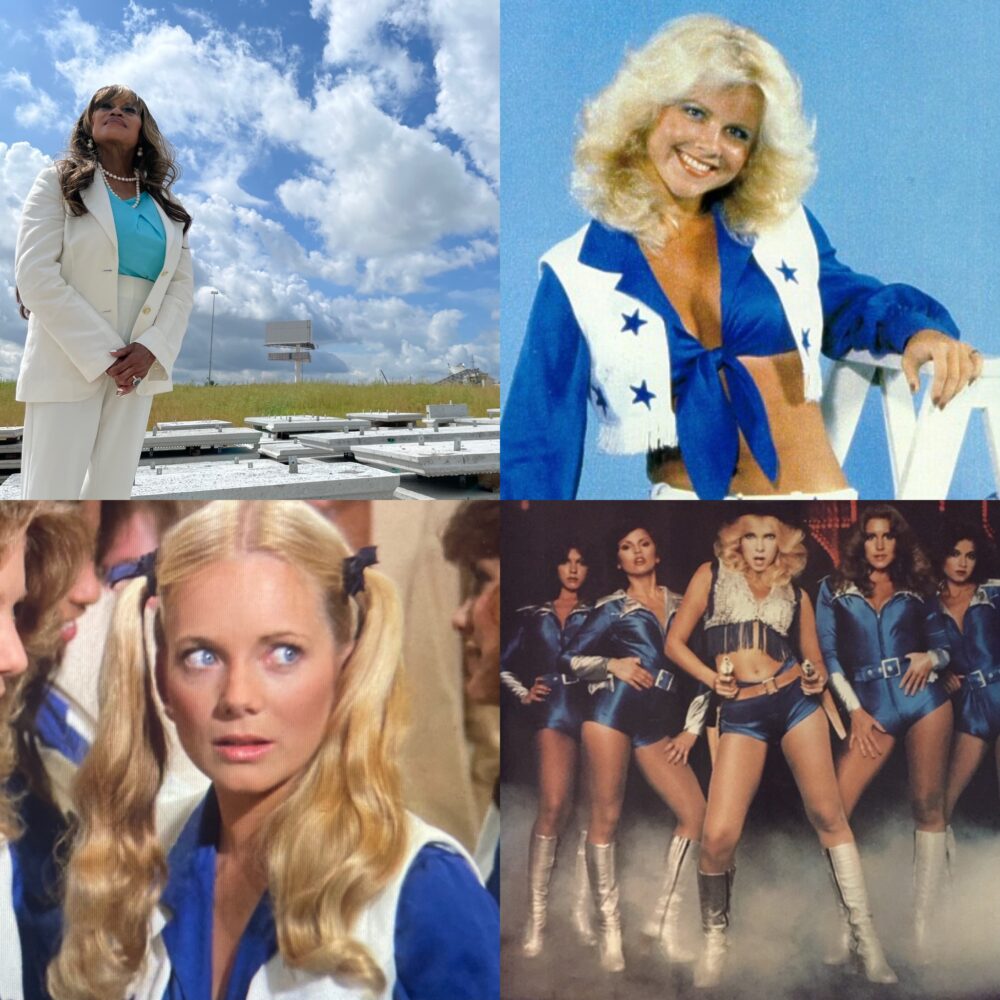 Clockwise, from top left: Vonciel Baker at the old site of Texas Stadium; Shannon Baker Werthmann’s squad photo, 1979; the Texas Cowgirls, the rogue group of former cheerleaders (some of whom posed for Playboy); Tami Barber in a featured role on “The Love Boat,” 1979.

I hope you get a chance to listen to my “America’s Girls” podcast, or at least rate it five stars, or at least tell a friend, or at least don’t confuse it with the American Girl doll, which would be disheartening.

Over on the Texas Monthly site, I’ve been writing “behind the pod” essays about the women I’ve gotten to know. Apparently a six-hour podcast wasn’t enough for yours truly. The podcast covers more than 50 years, with material drawn from more than 50 interviews, and I found myself wanting to tell smaller stories about people or moments that made an impact on me. Here’s what I’ve got so far. (These essays will continue rolling out through the end of the show’s run in mid-January.)

Meet the First Woman to Wear the Dallas Cowboys Cheerleaders Uniform: Vonciel Baker was a little girl from South Dallas, who grew up dancing in her living room and bedroom (and sometimes public parks), tried out for high school cheerleader three times but didn’t make it, and in 1972, stepped onto a rocket ship she didn’t know was launching.

Dancing With the Poster Girl of the Cowboys Cheerleaders’ Golden Era: Shannon Baker Werthmann was on posters, playing cards, Frisbees, calendars, and even her own doll. A trained ballet dancer, she elevated dance on the squad, first as the golden girl of its pop-culture late Seventies peak and then as the choreographer. She was unceremoniously fired in 1991 by current director Kelli Finglass, and talks about that for the first time, but what’s special about Shannon is actually everything.

The Cowboys Cheerleader with the Pigtails Shaves Her Head: Seventies cheerleader Tami Barber was “the girl with the pigtails,” but while pop culture remembers her as a cutie pie and a sweetheart (she is both), she was also a bit of a rebel.

In Search of the Cowboys Cheerleaders Who Posed for Playboy: In December 1978, five former Dallas Cowboys Cheerleaders showed their breasts to the world. It was the “NFL Bares All” issue of Playboy, but an act intended to leverage money and fame exploded into scandal, shame, and personal repercussions that have lasted decades. Only one of them has ever spoken publicly about it, and I searched tirelessly to reach those women — but did they want to be found?

The Women Who Created the Dallas Cowboys Cheerleaders: A very lazy telling of history suggests the cheerleaders were the creation of one man — Cowboys general manager Tex Schramm. Nope, try again. The cheerleaders are the enterprising work of a series of amazing women, including a brilliant academic, a feisty seamstress, a vivacious choreographer, and the unstoppable daughter of a military man.

The Photo the Dallas Cowboys Never Wanted the Public to See: After the 1978 Super Bowl, Dallas Cowboys player Danny White (married) kissed cheerleader Cynde Lewis (also married) on the sidelines while cameras clicked. Somehow, this amazing photo was kept from the public for 25 years. Learn the story behind the scandal that never was.