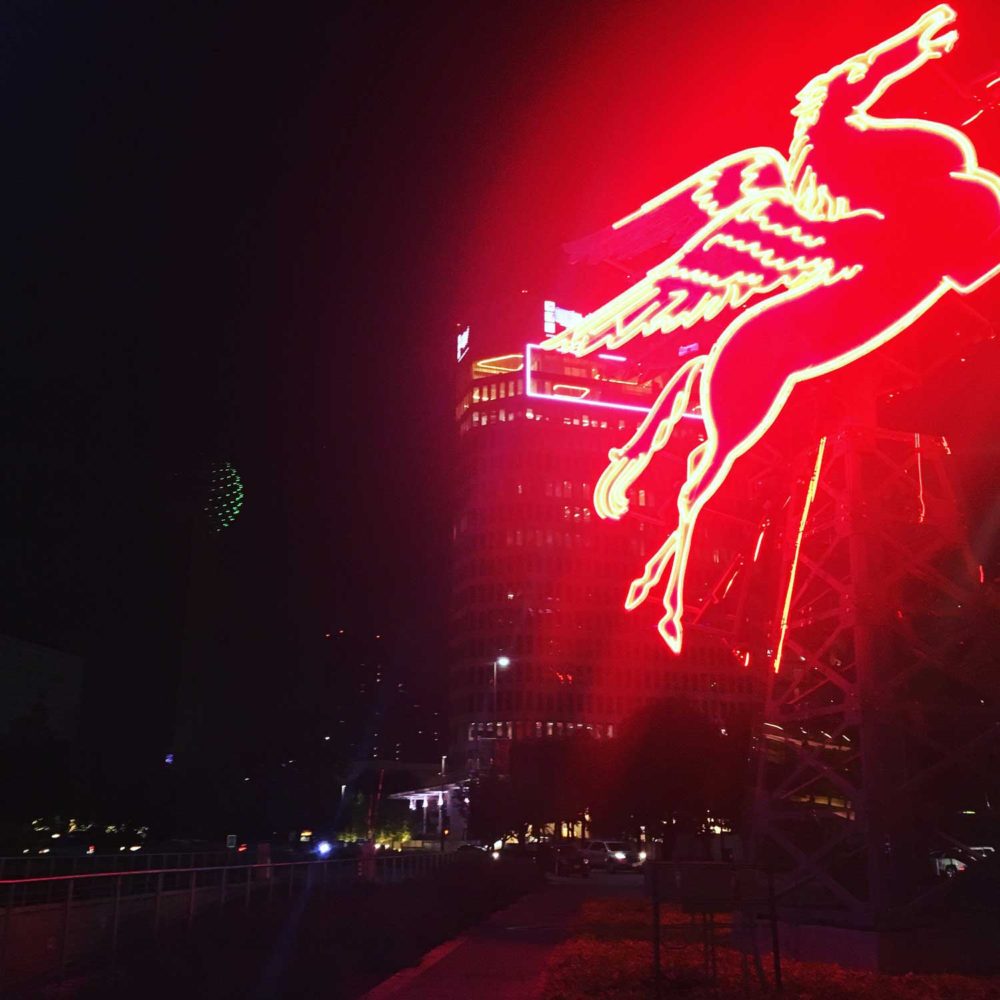 I was trying to get a picture of the red neon pegasus outside the Omni Hotel. I was standing on the sidewalk, in my high heels and the dress I’d worn to the gala, angling my phone to capture the Reunion Tower in the background, whose lights were flickering in such a way that if I timed the shot right, it looked like a crescent moon.

“Excuse me, ma’am.” A man’s voice, and out of the corner of my eye, I saw him approach.

I’d come to the gala alone. There is something stomach-sinky about dressing so fancy only to arrive by yourself, standing in that long check-in line reading Apple News, informing the woman giving out the table assignments, “Nope, just me.” But the evening had been fine. Nice, actually. In between the rosemary chicken and the auctioning of spa treatments, I’d made friends with a woman at my table and her teenage daughter, who rested an elbow on her mother’s bare knee as the three of us spoke. I left shortly past 10pm, hips swaying in a slightly exaggerated manner as I clacked down the long corridors, tapping my iPhone against my palm and scanning the premises for a less ordinary picture.

The red pegasus caught my eye as I headed out the hotel entrance, past the shiny women in short skirts and the clusters of men in suit jackets but no ties. I made my way to a cement island, where I took a few shots and scrolled through what I’d captured.

“Ma’am?” the guy repeated, as I endeavored once more to get the framing right.

I thought he was about to hit on me. Embarrassing, but true. That old line cast into the water: Can I offer you a drink? Isn’t it a little  early to go home? I had a queasy relationship with that kind of attention, like it was wanted and unwanted at the same time. I was so thirsty to be noticed, so quick to take offense. I turned toward him with my best “thanks but no thanks” face only to discover he was wearing a uniform.

“I know you’re trying to take a picture,” he continued, “but a protest is headed this way, and if you don’t move, you might get stuck in the middle.”

“A protest?” I dumped my phone in my purse without closing the camera.

“Yes ma’am, they’re headed to WFAA.” He pointed to the TV news station, whose neon call letters I could see from where we stood. “They’re protesting the Botham Jean situation.”

The story had been everywhere that week. An off-duty police officer (young, white, female) shot and killed a resident of her building, Botham Jean (young, black, male), in his own apartment under mysterious circumstances. I’d read a story while I was standing in the gala check-in line. The headline said: Mother demands justice for son.

“They’re on their way now,” the man said, pointing toward two cop cars with swiveling lights as they pulled alongside the curb, and I felt torn between staying, and witnessing something, and leaving as soon as possible to avoid traffic. So much of the past few years had been navigating what felt like diametrically opposed worlds: all this superficial, navel-gazing, cupcake-eating, Netflix-streaming Internet-addled decadence — and really serious shit. I’d never had so many conversations about everything and nothing. The meaning of fascism. Failures of the criminal justice system. Kim Kardashian’s ass. The poop emoji.

I decided to leave. My feet pinched in the heels, which were gold-flecked and spiked. I headed briskly toward the meter where I’d parked my car, only to realize I was on the wrong street. Dammit. I was completely turned around. A helicopter battered the air overhead as my eyes swept the grounds: Crowds, entrance, valet. Where was my car again?

The Omni is a long thin rectangle of a building with Vegas-y neon stripes alongside the sides. It reminds me of Xanadu. I think it’s been in Dallas close to ten years now, but the place still seems new to me, a surprise on the skyline. I walked back in the direction I came from, pretty sure I was headed in the right direction, and my mind drifted back to the only time I’d been inside one of the hotel rooms, many years ago.

That was an interesting night. A friend was in town, someone whose work I admired, and the two of us had dinner and fell into a deep conversation, heavy with the complications of life. We didn’t want to stop talking, so we went back to his room on a high floor and sat barefoot and cross-legged on the king-size bed, lights dimmed to maintain our campfire vibe. It was not romantic, and yet it was terribly romantic. I remember walking to the window at one point, placing a palm against the cold pane and how mesmerizing the glow of the blue neon was up-close, like staring into the future, or the 80s version of what the future was supposed to look like. My friend walked up slowly behind me, and I felt his arms encircle my waist, and I couldn’t tell if he was trying to shake off the terribly sad story he’d just told me, or if he was trying to nudge our evening in a new direction. My body flinched ever so slightly at his unfamiliar hands. I was in love with someone else, and for that matter, so was he, but this energy had grown between us, and I wondered for the slightest second if this was where our story would change — but no. It was only a moment, a slow rocking motion, the two of us looking out at the cement wonderland of Dallas before we slipped back to our ordinary lives. I still thought of that night from time to time — how unexpected the shape of intimacy can be.

I could see my car on the street now. I clicked past the valet and the people clustered at the entrance. “Nah, nah, they’re not violent,” a guy in a Polo shirt was explaining to a couple, who held hands and nodded. “They just want to be heard.”

The sky started to rain. It had been doing this for days. Short, silent bursts that were over in a few minutes, so that I’d walk out of the house and see the wet cement, my car covered in droplets, and think: When did that happen? A man in a yellow slicker that read POLICE DEPARTMENT stood on the curb, anticipating the action that had yet to arrive. He turned toward me as I approached.

“That one?” he asked. It was the only non-cop vehicle on the street now, and I nodded.

He halted the oncoming traffic with the confidence of a man carrying a firearm. The cars rolled to a stop as he shone a floodlight on them, and then he nodded for me to join him in crossing the two-lane asphalt. “Thanks so much,” I said as I neared the driver’s side door. “I didn’t expect an escort, I appreciate that,” and he disappeared again without saying a word.

I slipped in the front seat and pressed the engine button, and the stereo roared up with the ELO song I’d been listening to on repeat all day. A major key, followed by a minor key, followed by resolution: A narrative arc in three notes. I hit a button on the console screen, and the song jumped back to the beginning again. My windshield wipers squeaked out of time across the pane.

Back in my driveway, I slipped on the flip-flops I’d left in the floorboard of the driver’s seat, because walking on the gravel drive will wreck a pair of good heels. I dangled the pretty gold-flecked shoes from my crooked fingers as I unlocked the door to the carriage house where I have made the last seven years of my life.

“Hello baby,” I said, dead-bolting the door behind me and taking a seat on the stairs beside the cat who had come to greet me. She turned in a circle against my leg, though I never understood why, like maybe she wanted to touch all the parts of her against me at once.

“Hello baby,” I said again, scratching the spots behind her ear where she couldn’t reach. “I’m home.”