Last Saturday morning, I woke before dawn in the cozy loft bedroom of my friends’ Tribeca apartment. For mysterious reasons, I’ve been waking up early for the past two months, sometimes as early as 3:30am. I badly wish I could sleep longer, but I’ve also grown fond of these dim and hushed hours before the world stirs. I can be quite productive. I write, I respond to emails, I tap around the Internet. I drink one cup of coffee. Strong, with a splash of milk and the packet of Splenda that, despite my mother’s protestations, I have not stopped using.

But staying at someone else’s apartment made the coffee part tricky. The bedroom was tucked away in back and situated at the top of a narrow winding staircase that looked straight out of a children’s book. Every time I climbed those steps, I felt like I was entering Narnia. 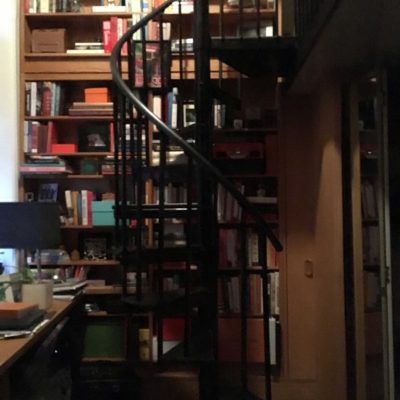 The rest of the apartment, however, had a chic modern vibe. The design was an open plan, so the kitchen was within eye shot of the queen-sized bed, so if I were to use the Nespresso machine, with its insistent counterfeit grind, I would probably wake up the two people who had been generous enough to share their space with me. That was no good.

Shortly before 7am, I snuck out the front door and headed into the crisp morning of late fall. I reached into my purse for my wool cap, but I had misplaced it the previous day. The Uber? My editor’s office? Oh well. The sky was a soul-stirring blue. The garbage trucks inched along the curb, making their robot beeps. I walked over to a hotel called the Beekman, where I had eaten avocado toast the previous afternoon while seated underneath a large portrait of Edgar Allan Poe. The place was so blindingly lovely that I worried someone was going to kick me out, though the place was open to the public. I wasn’t some interloper, but it was hard to believe I could ever belong in any place so beautiful.  A vaulted ceiling stretched at least seven stories high, a long glass case was filled with ancient books, the velvet furniture was as handsome as it was comfortable.

“Do you have any coffee?” I asked a woman at the hostess stand in front of the restaurant, and she gestured like a game-show hostess to a silver carafe on the bar, alongside paper cups.

She shrugged. “Help yourself,” she said.

The place was empty except for two women wearing yoga pants and infinity scarves locked in an intense conversation in the far corner. I assembled my coffee, the splash of milk, the thwack-thwack of the Splenda against my knuckles before I ripped the packet and poured the sweet white powder into my cup. I took a picture of the restaurant, with a rainbow cube-shaped backdrop of stained glass that was nothing short of breathtaking to me. 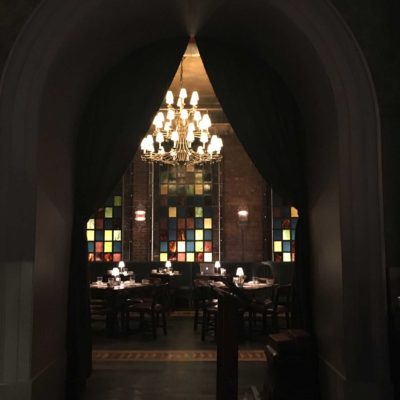 “I’m sorry to be that person,” I said to the hostess, feeling her eyes on me as I adjusted my phone to get a better angle. It still gave me a tweak of anxiety to take pictures when someone was watching. Everything, everything gave me performance anxiety.

“Do you want to sit there?” she asked, pointing to the table.

She looked around her and stretched her hands into the open space. “If we get a party of 50 people, I might have to ask you to move.”

I laughed. The woman had closely cropped ginger hair and fine bone structure and a smattering of freckles across her nose. She had cool glasses that I think had red frames.

I evaluated the spot with my eyes now, instead of my camera. “I mean, having my morning coffee there would be like the completion of a dream I didn’t even know I had.”

She smiled. “We’re bored,” she said in a quieter voice. “Let me do this for you.”

People often ask if I miss living in New York, assuming the answer will be yes, but it’s not. I don’t miss New York, with its exorbitant rent, and lurching subway cars, and miserable weather in both summer and winter, and streets crammed with strangers and all-too-human smells. But I miss the people of New York. My friends, of course, but also the people you meet when you are going from place to place. New Yorkers are often described as rude, but that doesn’t sound right to me. In my experience, New Yorkers are generous, open, street-smart, and exceedingly helpful. But they are also crunched for time, numbed by noise, and indifferent to the chaos unfolding around them. They’re doing their thing. But every once in a while, you find yourself in a small private corridor with a New Yorker you have never met, and will never meet again, and you notice — how easy it is to connect.

“Do you want me to take a picture of you in that booth?” the woman asked, as I unraveled my wool scarf and placed it on my puffy coat in the space beside me.

“Oh no no no,” I said, though if I were being honest, the answer would have been yes, because I had this fantasy it would make an amazing author’s photo — me in front of that eye-popping backdrop — but I had only just woken up, no makeup, hair untamed, and the woman’s kind offer put me too closely in touch with my own ego needs. “Just sitting here will be fine,” I said, and she gave me a curt nod and left me to my coffee and my laptop.

It was my second and final morning in New York City. I had arrived late Thursday afternoon, in the middle of the first snowstorm of the year, and the city had been thrown into turmoil. No taxis at LaGuardia. George Washington Bridge shut down. Tales of people sleeping in their offices, trudging home though the snow from Brooklyn to Queens. I grabbed my Uber at a hectic meeting spot in a cold garage outside the airport with one-percent battery left on my phone.

“You have no idea how happy I am to see you,” I told the driver, as he placed my suitcase in the trunk of his mid-size black SUV.

“It’s bad out there,” he told me, sliding in to the driver’s seat.

“Let’s get to know each other,” I said, and he gave a good-natured laugh, but we did not get to know each other at all. He handed me a plug for my phone, and I stared at the screen for the next two hours, listening to a podcast about human evolution, and he turned up the radio, which seemed to only be playing songs by Rihanna, which suggests I don’t actually know which songs are by Rihanna. I have a rich history of bonding with taxi drivers, but this guy wasn’t into it. Maybe Uber drivers are different, less practiced in the art of professional conversation, or maybe it was his personality, or the stress of the weather. The guy gave off a vibe like: Traffic is so bad, please leave me alone with it. He avoided the highways, winding along the clogged back streets of Brooklyn as snow pelted the windows, and after 120 minutes together, he dropped me off at the apartment with a long sigh. 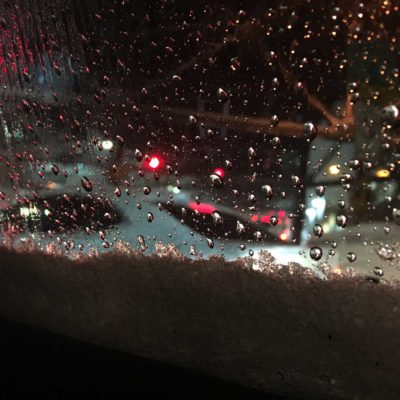 That car ride cost me nearly as much as my plane ticket. So no, I do not miss living in New York. Life is much easier in other parts of the world. But I do love New York. And I do love visiting from time to time.

I was close to finished with my coffee when my host texted. “We’re up! Where are you?” I told him I’d return shortly, and I gathered my things. I left a tip I hoped was generous. The friendly hostess was still at the stand, and I introduced myself formally, placing out my hand, and she introduced herself to me. I told her I loved this hotel so much that I was making excuses to visit. She understood, she said, she loved this place, too. I pointed to the spot where I’d had lunch the previous day, and the couch where I had a cappuccino once. I told her I’d never heard of the hotel before a few years ago, and she said, well, it’s only two years old. I said, wow, I don’t know anything about this place: Who Mr. Beekman is, or who built it, or why.

She said, “Would you like a brochure on the history of the hotel?”

Yes, definitely. She opened up a low drawer, and there, sitting on a stack of manilla pamphlets was something I never expected to see again. A black wool knit cap with rainbow stripes. 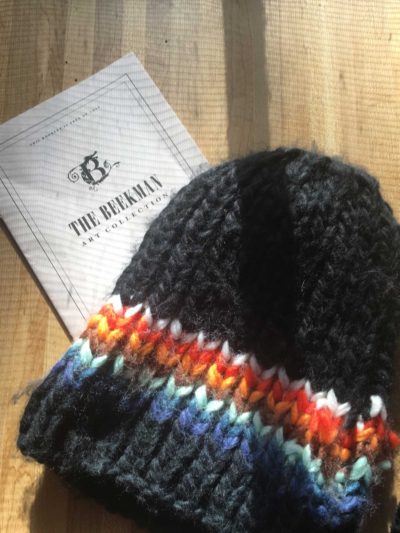