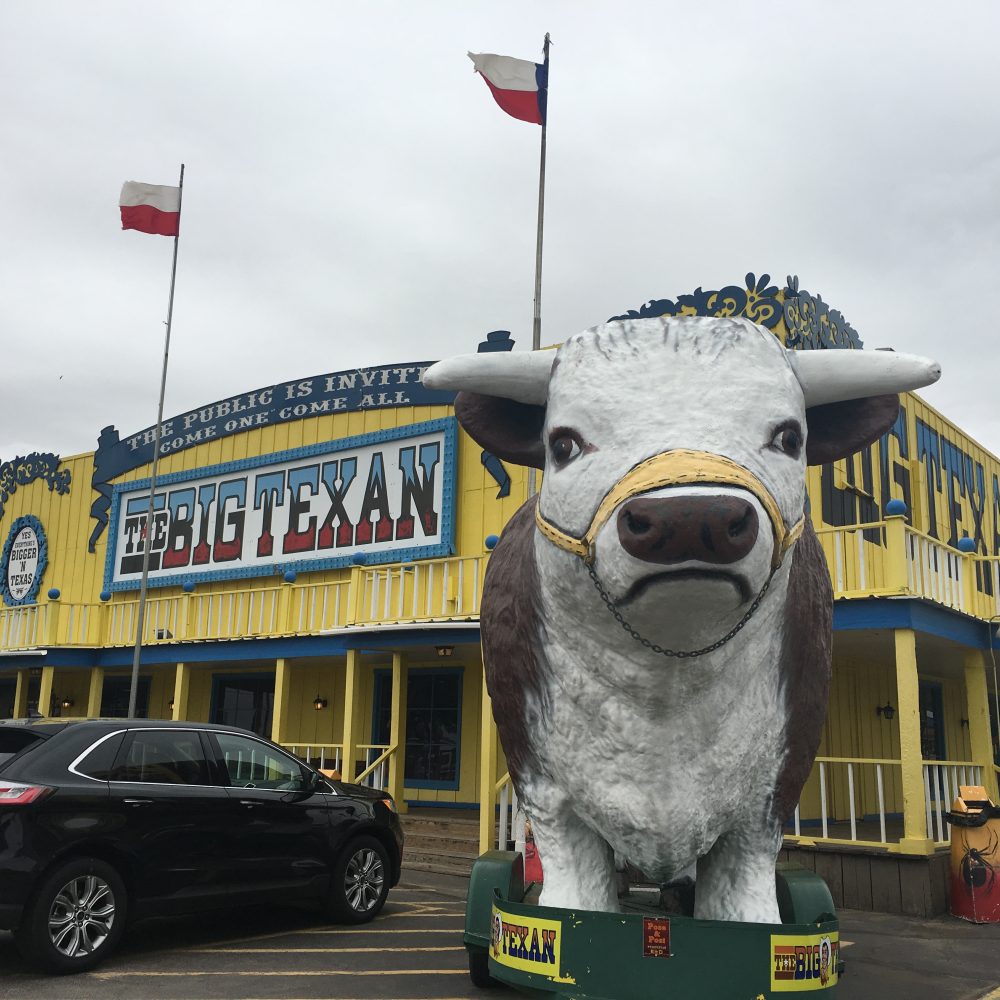 I’m seated in a wooden booth with a vinyl tablecloth in a cow-hide pattern, and as my eyes trace the perimeter of the enormous banquet hall, I count twenty-six animal heads.

“What can I get ya?” My waitress wears a straw cowboy hat and a plaid Western snap shirt.

“That was easy,” she says, and gives me a wink. The back pockets of her jeans are bedazzled in blue sequins.

The Big Texan is one of those Route 66 novelties in Amarillo, Texas. Billboards beckon drivers toward the place from hundreds of miles away: Home of the FREE 72 ounce steak. It was my friend Mary who recommended it to me when I told her I needed a place to stop in Amarillo.

“It’s like if Six Flags had a baby with the set of Hee-Haw,” she told me, and I was sold.

High on the wall across from me I see a series of clocks with large digital displays reading 60:00. A man in a ten-gallon hat says something into a microphone. He has the inaudible clip of an auctioneer. It’s only after the man stops talking that I finally notice: The countdown clock has started. And look: One brave man is seated at a long wooden table on an elevated platform. He looks like a lonely king, or a very tiny wedding party.

“Chicken-fried steak?” A different waitress slides my plate onto the cowhide vinyl. She is also wearing a straw hat, but she is much younger, a teenager, and she has dark braids falling along either shoulder. The plate is enormous — comically grandiose, which seems to be the signature — and it has a funny bit of garnish: a jalapeno with a tiny Texas flag stuck in it.

“Nice touch,” I say, pointing to the jalapeno, and she smiles. 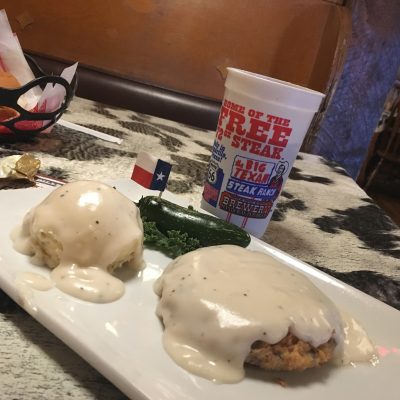 I watch the man plowing through his 72-ounce bad boy while I nibble on my chicken-fried steak. It’s like bouncing a a basketball on the floor while you’re watch an NBA game. The man is wearing a Hawaiian shirt. He is 35, maybe 40, with a trim beard. He sips from a straw rising out of a boot-shaped glass tinted pink. There is also a shrimp cocktail and a baked potato the size of a football on the table. Every once in a while, someone walks past him holding out their iPhone and he raises a fork with a piece of steak on it, then goes back to eating. The slab of beef is so ginormous it practically drips over the sides. A piece of beef the size of a road map.

Did he make it? How long did it take? Can someone Wikipedia this?

I wish I could tell you what happened, but I had to be on my way. I had another hour’s drive to reach Palo Duro Canyon before 3pm. I hate to leave you in the narrative lurch — but thus is the cliffhanger of the Big Texan 72-ounce FREE steak challenge, where heroes are made, heroes are broken, but no one leaves hungry.

I did keep one memento from my brief stop. My new lucky charm. 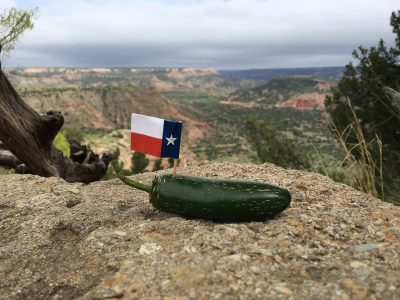