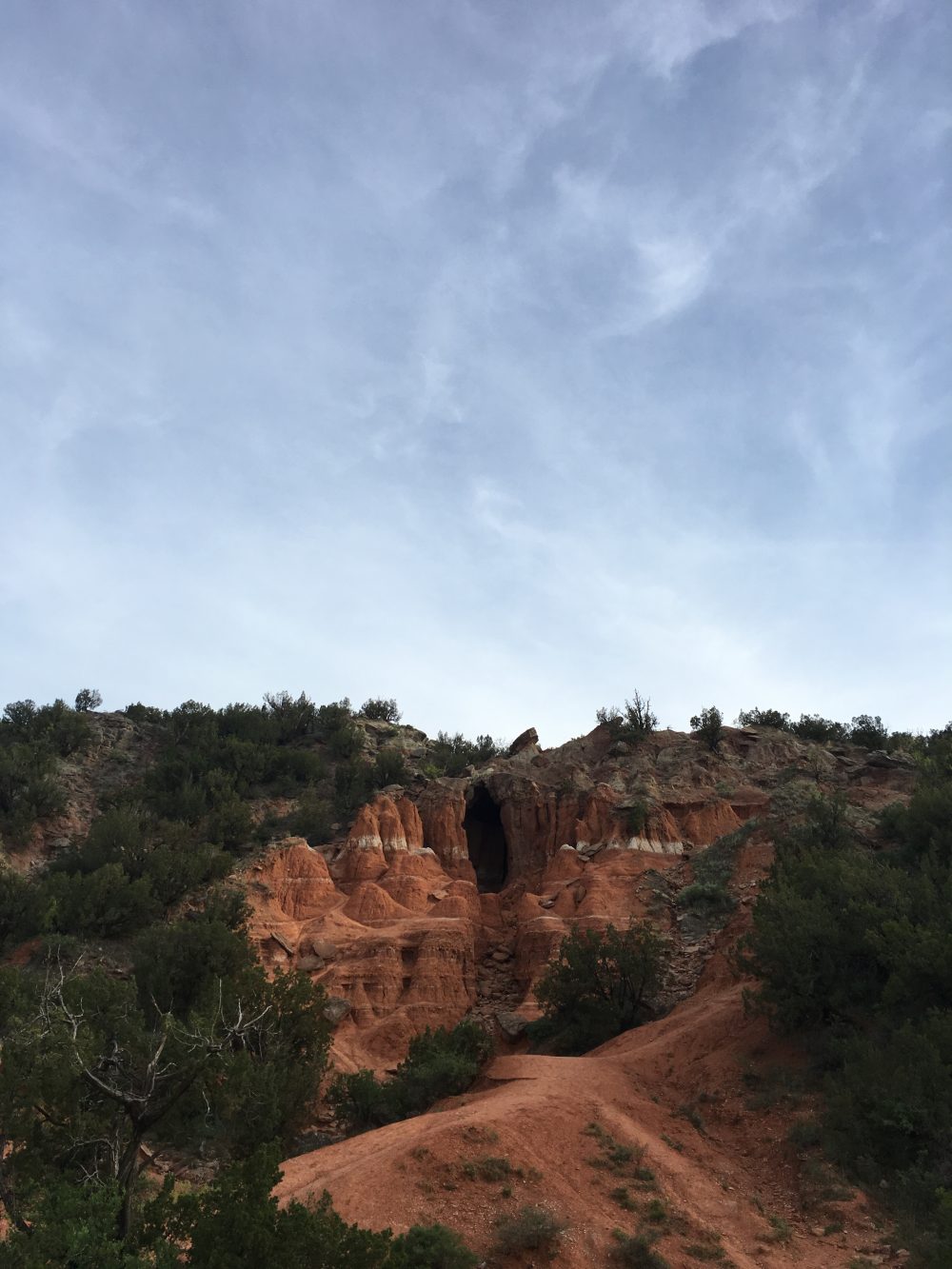 I drove to Palo Duro Canyon, because I had to go somewhere, but I couldn’t go far. I was on deadline for my book, due in September, and the more extravagant trip I had envisioned — out to the northern rim of the Grand Canyon, the quieter and more profound side of the great gash in the continent — would take too long. Palo Duro was a six-hour drive from Dallas. I stumbled on a cabin on the website, and I called to see if it was available, and the woman said, “Those cabins are usually booked, but we just had a cancelation.” Boom. Like a romantic comedy or something.

I stopped by Cadillac Ranch on my way. I’d never been. Those cars have been upside down in the earth for forty-five years, much longer than they were ever on the road. They are mottled and drippy with stalactites of spray paint. I had a can of gold, and I tried to draw a cat’s face, but the wind was blowing the spray, so it came out a circular muddle. Let’s call it Jupiter. It was a wind-swept afternoon in late April, and kids scampered around, sat on the fins, very communal and pre-Instagram, like maybe visiting was more the point than documenting. 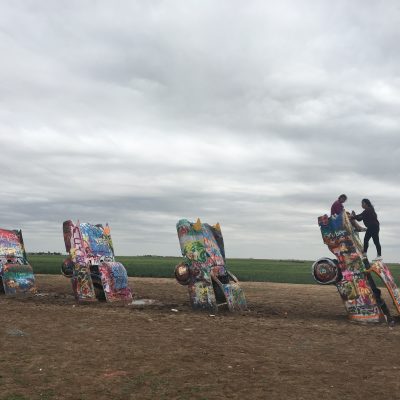 I checked in to the state park, got an old-fashioned key. The cabin was small and warm and built in the 1930s by men in the Civil Conservation Corps, part of the New Deal program, out-of-work men who probably did not imagine the place would be visited by a single woman traveling alone. Thank you anyway, gentlemen. The cabin looked directly onto the canyon, a marvel of compressed time, pink and grey and taupe. Time that can be seen. Pleistocene. Triassic. Permian. Time has stripes. (What will our stripe be?) 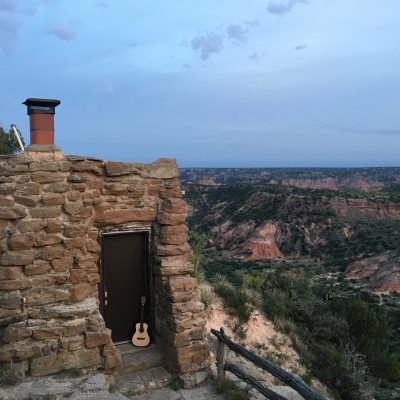 It rained in the morning, bummer, and I sat inside typing, and when it cleared in the afternoon I took a hike to the Lighthouse hoodoo, a three-hour excursion along muddy rust-colored river beds. My socks and the bottoms of my trousers were wet from walking across shallow streams. I listened the John Mulaney interview on Fresh Air. True story: I once saw John Mulaney on the platform of the L train in Williamsburg, and I said to him, “You’re the funniest one on Best Week Ever!” and he said, “Oh, well, thanks.” And I was like: I wonder if we’re gonna date now. After that interview, I switched over to Philosophize This!, a podcast I’d been enjoying on the drive. The Mary Wollstonecraft episode. [whistle sound] Now that woman had a rough life.

The cabin smelled funny when I returned, like sour milk, or mildew. Maybe the rain had coaxed out a stink I hadn’t noticed when I was inside the place. I played my guitar, a Tom Waits song. The sun came out, and I walked out to my front porch and there were people at the cabin across the way, and they never waved. It was odd, stepping into the space across from them, and never acknowledging each other. I guess I never waved to them either.

I walked to the lookout point down a hill from my cabin. It was empty save for a guy leaning against the railing, and I walked past him onto a trail that wound along the rim until I found a flat spot near a ledge to take a seat and watch the sun sink. The sun was behind me, actually, I could see the golden halo on the other side, but the bottoms of the clouds took on sunset colors. Pink and a bit of purple. Nature’s Instagram filter.

Kierkegaard said, “Anxiety is the dizziness of freedom.” I thought about that line as I stared down into the canyon, felt the whoosh of the vertigo. I remember being a young girl, being freaked out by the awareness brought on by standing at the edge of a cliff: I could jump. I could end it! The power I had — to change fate with a slip of my foot. It startled me then, and still does. The birds were chirping, a low hoot that was maybe an owl. The thud of a truck door closing, the chug of its engine, and wheels grinding up the gravel as it disappeared. Alone now. I placed my hand in a baggy, and pulled out a handful of my cat’s ashes (she had died, and I had come to Palo Duro to let go of her), and I scattered the ashes across the cliff, and the wind whipped up to blow some of them back on me, as always seemed to happen in the movies. A Pablo Neruda line came to mind. I love the handful of earth you are. What else to say? She was my cat. She was a companion I didn’t know I needed, and now she was gone. Tears slipped off my chin. I scattered another handful across the rocky earth, and the ashes landed on a small spiky plant with purple buds on the tips.

I closed my eyes, and felt the breeze against my face, and I thought about how much smaller a woman’s life was once. That Mary Wollstonecraft podcast — I knew that stuff, but it was still an eye-opener, hearing the perimeter of that world. No education for women. Value mostly in your appearance, your docility, remaining quiet. A woman as property. A woman as helpmate, her purpose to lift up her husband, raise children, a satellite to the central body.

I am lucky to be here. How many people get to be here? By which I mean: The Lighthouse Cabin at Palo Duro canyon, two days of a spontaneous and silent retreat, but also in the midst of a book that someone will pay me to write. I didn’t get other things, but I got this. I looked down into the canyon at the paths snaking along the bottom, and wondered how they got there, whose feet made the grooves. I stood up, dusted off the seat of my tan trousers and walked back to the cabin and started packing to leave the next morning. Clothes folded into the green suitcase I’ve dragged around for the past ten years. The three-quarter scale Martin zipped back in the padded carrying case, and as I took it to the car I heard someone at the lookout now, singing into the canyon. He sang in that American Idol way. Melisma, I think it’s called. But the voice was clear and pretty and sincere, and it rang across the vast open space. I couldn’t make out every word, but I caught a few. Lord. God. Almighty.

I was worried about the book. I had four months before it was due, but I was way behind schedule, and I couldn’t puzzle out the structure, and I was fretting all the time. Like a Rubik’s Cube you are constantly trying to solve in your head. A book is nothing but choices. Go down this corridor? What about that stair way? You can drive yourself batty with the choices, all the paths you could carve through your own past. At some point, you have to say: This is how we’re going. I’m not entertaining other options any more. This way, and no other.

Night fell, and I stepped barefoot onto the stone walkway outside the door and found the stars in the sky so bright they seemed to be pulsing, sending messages to me: We’re here. Don’t forget us. A feeling of oneness shot through me. I’d been watching Cosmos, the Carl Sagan version: We are a way for the universe to know itself. We are made of star stuff.  The canyon was dark and flat, and the sky took on a shape like a dome, like standing inside a planetarium. I found Orion’s Belt. I found the Big Dipper. I waved up to the beyond. I am here, too. 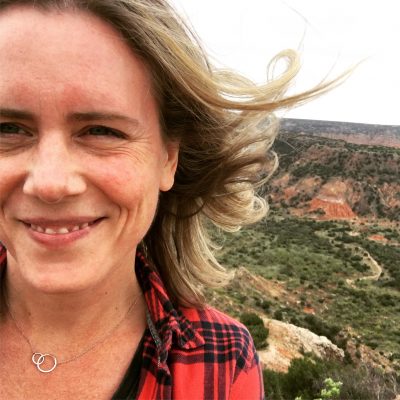