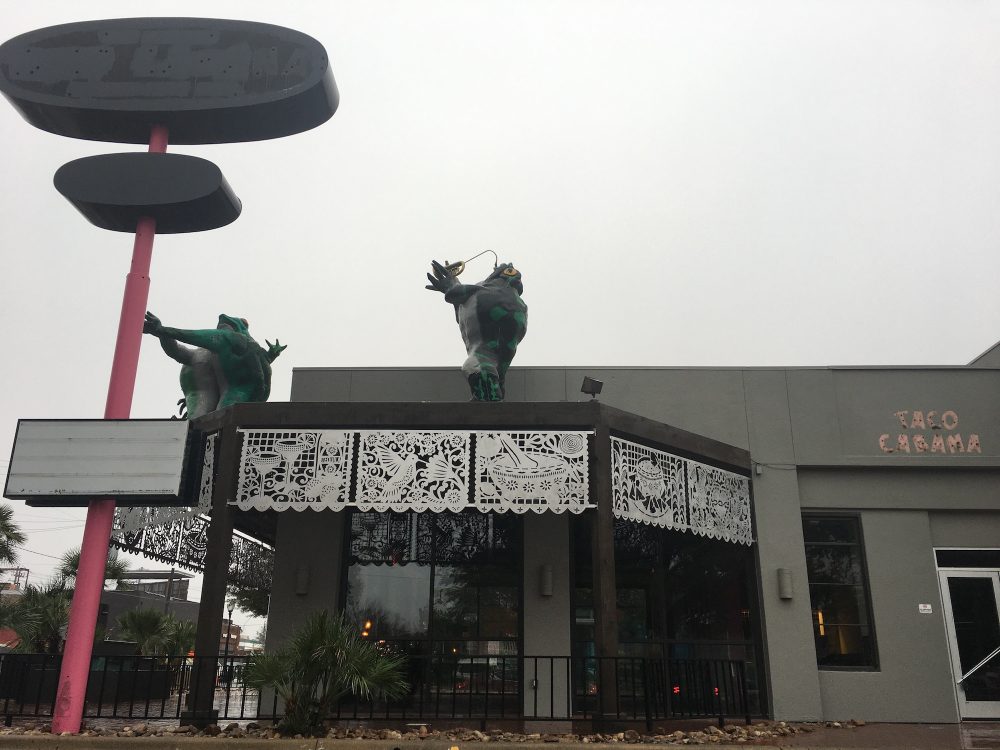 The lights inside Taco Cabana had gone dark. It wasn’t even 7pm, and the neon of Lower Greenville was in high throb, Christmas lights still wrapped around trees in early January, so the darkness of that restaurant was conspicuous, like the street was missing a tooth. I slowed down just enough to make out the blank marquee. No specials of the day, no puns to make you groan, just: Nothing. The next day I found the piece on Texas Monthly: Taco Cabana closes 19 locations in Texas.

I practically spent half my college years in the drive-thru of the Taco Cabana. The place was 24 hours a day, which turned out to be the same number of hours I wanted to eat Tex-Mex, and Taco Cabana had flour tortillas so fresh they were still warm when you unwrapped them from the foil. I was hypnotized by the enormous machine that made those tortillas, a conveyor belt you could usually spot from the counter as each ball of dough was plopped, then squished, plopped, then squished. In high school I was all about Taco Bell, with its dirt-cheap burritos for less than a buck, but Taco Cabana was next-level, it was like trading the mall for a blues bar, or Budweiser for Jack Daniels. The chain started in San Antonio, but I had no idea it was Texas-based until I started traveling. Then I badly missed the flourishes I’d come to think of as artisanal in the soulless pantheon of fast food: a salsa bar with tiny cups, frozen margaritas (back when I drank them), a screened-in patio, a bold use of pink.  One Christmas, visiting my family from the big city where I wanted to go so badly till I finally arrived, I ordered the three-cheese enchilada plate in the drive-thru and sat in the parking lot of a Target as I ate the whole slurpy mess, my plastic fork making squeaky sounds against the styrofoam. It’s weird the things we miss.

I moved back to Dallas several years ago, and the Taco Cabana was maybe a three-minute drive from my house, and I cannot tell you the number of times I made that trip on deadline, or ducked into the drive-thru on my way to some event, chit-chatting with whatever friendly stranger was in the drive-thru that night. I know there are better places. We’re living in the golden age of tacos here in Texas, there must be six taquerias within a mile radius, but I’m a sucker for nostalgia. The location had dancing frogs on top of the building, a roadside sculpture by the late great Bob “Daddy-O” Wade, and I liked the touch of bizarre-o, how visitors never failed to do a double take. Well, why wouldn’t there be tango frogs on top of a taco restaurant? Is that weird or something?

I suppose I could have predicted the place’s demise. The Lower Greenville area has exploded over the past few years with gelato shops and wine bars and new-concept restaurants that don’t serve Diet Coke (I know, because I asked). I probably wasn’t the only person who used the Taco Cabana primarily as a parking lot to visit more popular places down the street. But I was sad to see the lights dimmed, another sliver of my routine slotted into the history column. I know there are other Taco Cabanas, it’s just that, for a while, this one was mine.