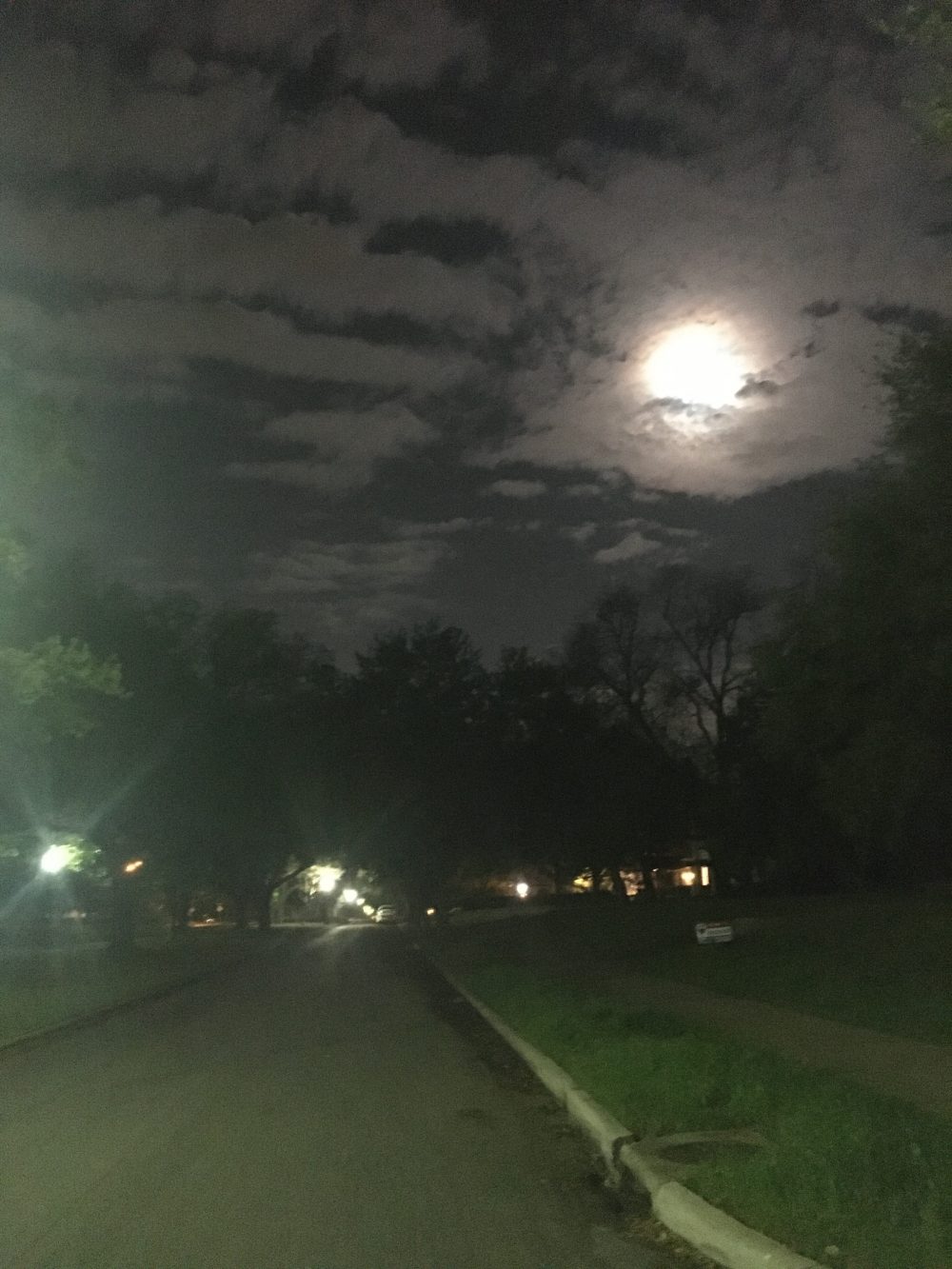 One of the many crappy pictures I’ve taken of the moon.

I woke up at 4:30am, cat in a C-shape beside me. Last night I finished edits on a magazine story, and I can never sleep long after that. My brain stays in hyper-vigilant mode, too much adrenaline I suspect. As I lay under the covers, I could see rivers of text on the galley proof in my mind’s eye, three neat rows spilling over five pages, but I didn’t want to think about the text, because what if I remembered a typo? A mistake? Too late. The story had shipped.

I made coffee in the red kitchen, cracked open the wet food as the cat scrabbled his paws against the white cabinet in anticipation, our morning ritual. I passed a window, and that’s when I saw her: The moon. A full and luminous moon in a clear sky on a cool May morning near the end of a quarantine. I had the urge to step outside. I normally write first-thing upon waking, but two months of a shelter-in-place mandate, and you start doing strange things.

I tugged on jeans and a flannel shirt in my still-dark bedroom, slid on flip-flops, and headed down the stairs and out to the street with my mug of coffee. I could see the moon teasing me through the tree tops as I wound along the leafy sidewalk to the clearing for the full and unimpeded view. I took a seat on the curb, rested my chin in my hand. The moon, y’all. The moon! I started to take a picture with my iPhone, but the screen showed a long white smear going sideways, and I couldn’t bear to see her like that. I read once why you can’t take a proper picture of the moon, but it never stopped me from trying.

I tapped the playlist I’d been listening to for weeks. Simon & Garfunkel. The songs were short and pristine, a few revved me up and a few calmed me down. Not too long ago, I watched “The Graduate” and found myself newly captivated by the depth of the songbook (also the movie). On my walk last night, I played “The Only Living Boy in New York” over and over again. I’ve been like this with songs as long as I can remember. Again, again. A repetition somewhere between love and need. Little kids are like this, so maybe I just never grew out of it. I tapped the word “America,” and the gentle hum of the opening bars joined me on the street corner.

My mother liked Simon & Garfunkel. I remember the covers of the vinyl albums in the stacks that lived beneath the bookcase in the living room, those two men’s stark faces in the mix alongside Peter Paul & Mary and early Beatles albums. Mom liked folk music, feel-good sing-alongs. I guess I thought Simon & Garfunkel were sweet and light, the equivalent of restorative yoga or a nice chai tea, but they’re actually light and deep AF. Not too many pop songs can rival “America.” I saw the story unfolding each time the music played: Our two young wanderers boarding the Greyhound to Pittsburgh, the countryside turning to a motion blur as the bus barreled through the night, the woman drifting off as the man stared into darkness. I felt something like a gasp each time I reached that one line.

“Cathy, I’m lost,” I said, though I knew she was sleeping.

Goddamn, Paul Simon. I stared up at the moon. The line kept going.

I’m empty and aching and I don’t know why.

It was one of the saddest lines in pop music. I’d spent twenty years wondering if I’d turn on that line, decide it was too literary, too on-the-nose, but it never struck me as less than perfect.

A rustle on the sidewalk, and I tore myself away from the moon to find a woman walking her dog, a pit mix probably, brown with white splotches. I felt slightly busted, and I raised my hand in greeting as I punched down the volume on my phone. I was doing that thing I can’t stand in other people, playing music without ear buds, subjecting everyone else to my song selections, but the street had been empty up to now. The dog sniffed a patch of grass and another as the woman walked patiently behind.

It’s funny what a stranger will tell you. “I can’t choose either,” I said.

My coffee was gone now, the song was done. I wanted a second cup, but I knew it was a mistake. Every time I made a second cup of coffee, I regretted the decision. Literally every time, had to be a lesson in that. I walked back into the house, the mug dangling from my fingertips. The big gray cat flopped on the ground, rolled on his back as I rubbed his soft tummy, our front-door ritual.

“You ready?” I asked. “You ready to start the day?” But he was ahead of me, galloping up the stairs again.