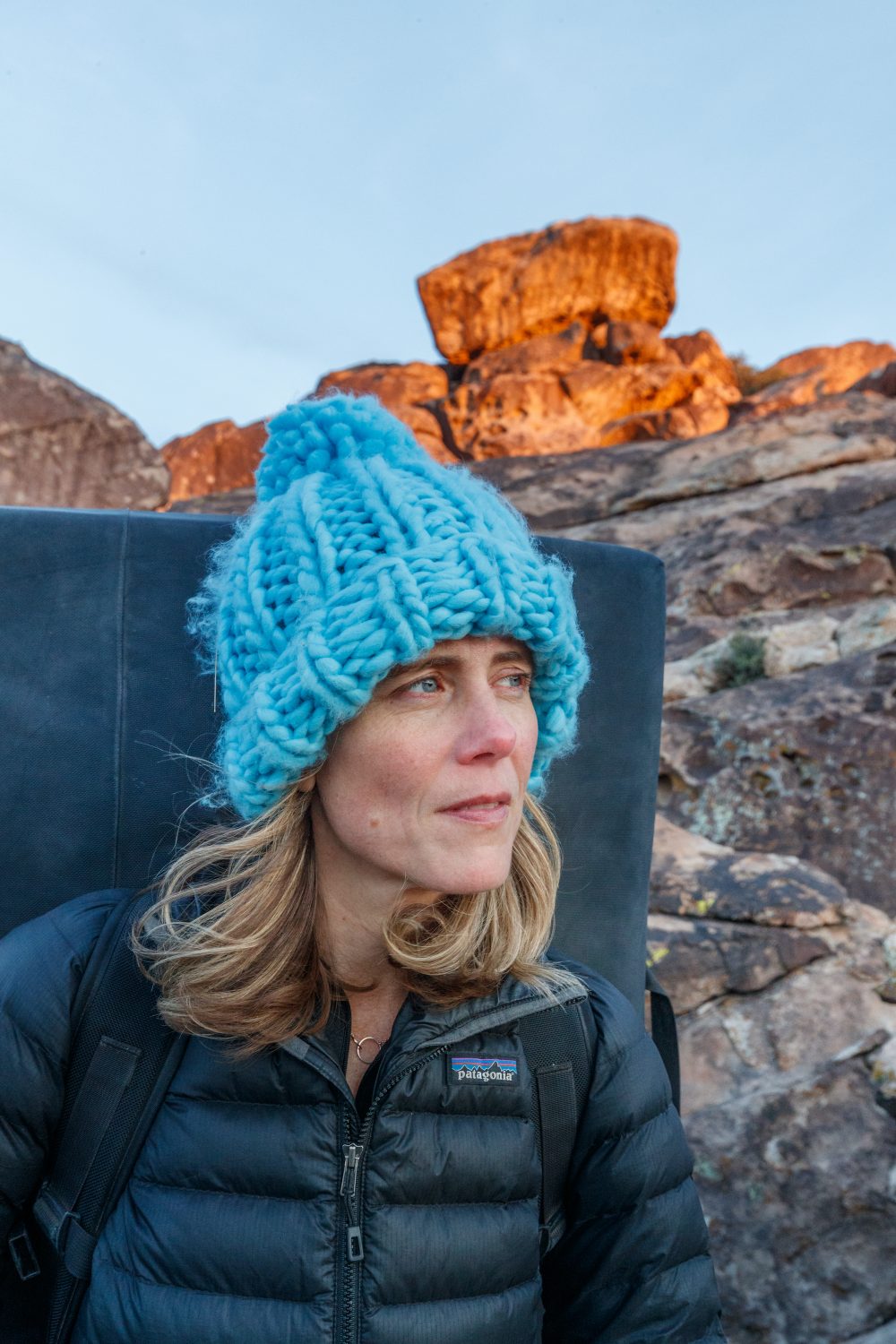 Last October, I went rock climbing in Hueco Tanks, an hour north of El Paso in West Texas. I’d never been rock climbing, but it looked fun. This is the kind of questionable analysis that has lead to worlds of trouble, and oceans of fun. My guide was a guy named Jacob. We spent the afternoon noticing the sound of the wind in the trees, debating virtual worlds versus actual ones, staring at ancient pictographs on the inside of cave walls, and discussing how we might fare in prehistoric times (Jacob well, me not so well). I also spent plenty of time bouldering. I fell often, laughed a lot, and ripped up my tender pink hands. 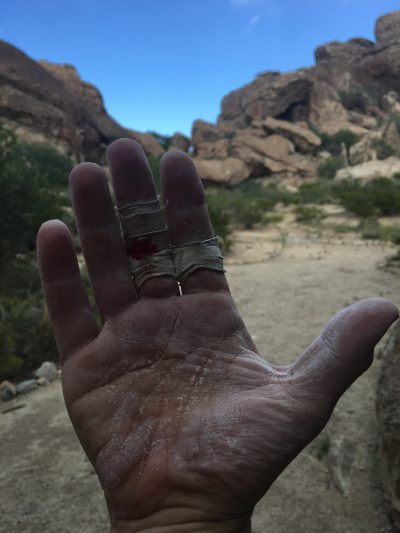 I’m not too athletic, but I try to stay teachable. This was the thrust of an essay I wrote about my climbing excursion that wound up on the cover of the magazine, the outdoors issue of Texas Highways. It came out in April. The headline: Adventure Awaits.

I saw the cover for the first time, two weeks into the pandemic. I was in line at Whole Foods, strangers standing a cautious six feet apart, most of us wearing masks. Adventure definitely awaited, but it was not the happy-go-lucky kind. The timing of my rock-climbing story was nearly comic. The opening described how I, as a writer, spent far too much time indoors. Ha. Why would anyone do such a thing? What had once seemed like lifestyle folly had turned to government mandate by the time of the story’s release. The “outdoor issue” piled on the rack, not one magazine taken. 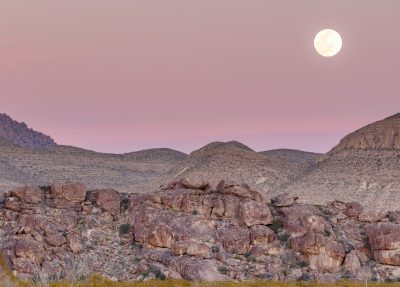 Over the next weeks, I thought about Hueco Tanks. It’s one of those desolate and glorious spots that people should visit, when they feel up to visiting again. Last February, I went there a second time to shoot pictures for the cover story. “I might be slightly nervous about doing this,” I told the photographer, Sean Fitzgerald, as we lingered outside the quonset hut supply store on the morning of the climb, watching scruffy dude-bros in hoodies practicing chin-ups. This was not exactly a controlled environment in which to make myself vulnerable. No flattering studio lighting, no hair-and-makeup people. Sean told me not to worry. He had the kind of low-key affability that either means he’s a good dude, or he’s a very sneaky one who will kill you in the middle of the night. Well, I didn’t get killed. 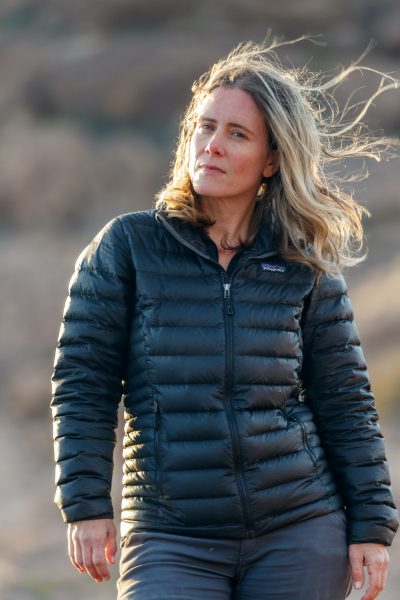 My mom said this was her favorite photo from the shoot.

Thirst trap. That’s the term when you post pictures on social media to elicit praise, which I did with these photos, and which totally worked. The thing about posting pictures of yourself as a woman is that the whole goddamn thing is a trap. You’re invisible if you don’t do it, you’re subject to scorn, judgment and criticism if you do, so I say: Pick a side and enjoy it.

Still, I’ve struggled with how much I want to be seen. And being photographed turns out to be a bit like rock-climbing. You gotta take a trust fall. I want to control the outcome, but the more I worry, the more I flounder. The more I think about my deficits, the more they are on display. I am forced into the moment, which I find a tricky place. It requires focus, and faith. I’m more of a specialist in sarcasm, and doubt. 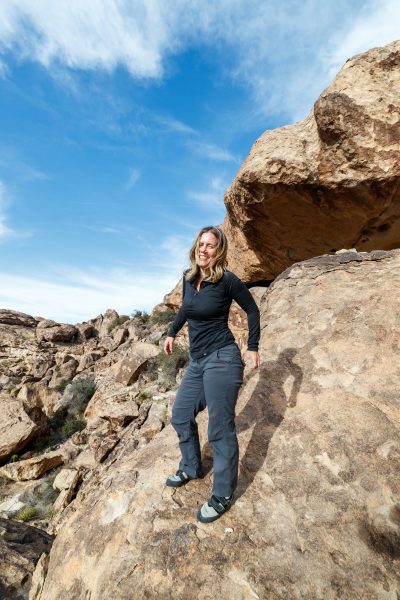 I was smiling because I had just summited that boulder with Sean Fitzgerald’s camera in my face.

We wound up hiking a lot that day. Jacob was leading us, nimble as ever, and Sean managed these steep climbs with hulking camera bags slinging around him, I have no idea how. We were seeking unusual landscapes, so we wound up traversing a very tricky abyss that left my knees literally knocking together.

Now is when I mention I’m scared of heights. I don’t like roller coasters. I get nervous on airplanes. I freak out riding the giant ferris wheel at the state fair. The boulders I’d been climbing were no big deal, but this drop-off had to be 100 feet. The plan was to step onto the edge of one boulder and jump onto another. Except the rock face was slippery, because the ice was melting in late February.  Except the ledge was thin. Except the 100-foot drop-off in between the boulders was so daunting I had to face the rock as I edged out, which left me stuck. Let me show you what I was up against (imagine a hundred-foot drop underneath Jacob): 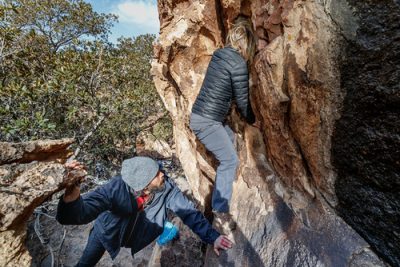 OK, so. It was a tight spot. I started to wonder if I might die doing a photo shoot for a magazine, and if this was heroic, or the opposite of heroic. I was vaguely aware of Sean taking photos during this time, and I thought: Good, my parents might need them for the trial. Everyone stayed calm during this mini-crisis. I was like, “Hey, guys, I’m a little scared.” And Jacob was like, “There’s nothing to be scared of.” And Sean was like: *click* *click.*

Eventually, Jacob scooched himself up the rock and straddled the abyss with his feet so he could coax me to the other side. Why? Because his blood runs Viking, and my blood runs writer, and these are our natural states. I made it to the second boulder. My whole body was trembling. I grew cold. Adrenaline spiking, then fading. Afterward, I couldn’t stop giggling.

We climbed for a couple hours after that. I was tired. I often complained to Jacob (to anyone who would listen) that I thought my arm strength and my curvy size and my woman-ness were all detriments to my climbing, and he kept saying I was mistaken, the secret was practice, technique, confidence. That afternoon I saw this woman dominate an advanced boulder. It was like watching an ice skater nail a triple lutz; it brought tears to my eyes. That woman had brought her baby into the park, and her husband took turns holding the chubby-cheeked little guy as she climbed, and this made me tear up, too, because I’ve always thought of rugged adventure as a solo pursuit, not one for couples. Not one for moms.

Then it was my turn to climb (a much lower) boulder. Jacob was in my ear telling me I could do this, and I know that woman was in my head, telling me the same. This is my favorite shot of the day, because I look so focused. I am in it. (Also, my hair looks really good.) 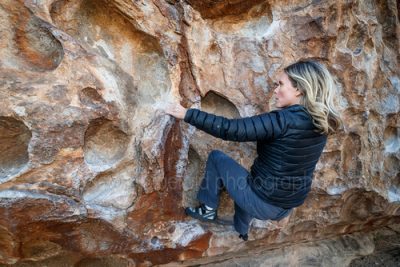 I’ve spent a lot of time on my own, not because I prefer being on my own but because it’s easier. You don’t get hurt. You don’t get disappointed by other people, who never can meet your outsized expectations. Solitude has been a practical downsizing for me. Easier this way. And I’m glad I can move around the whole like this. But it’s also nice to remember I like being part of a team. I become stronger, I’m pushed farther, and I usually have a better time. I’m a social creature in the end. Aren’t we all? 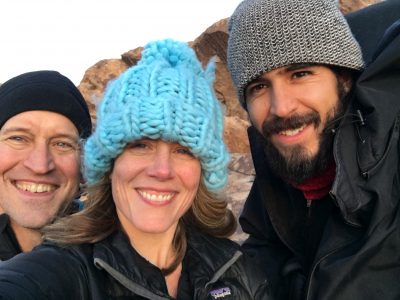 We left the park after sunset. A long day had come to an end. But as always: Adventure awaits. 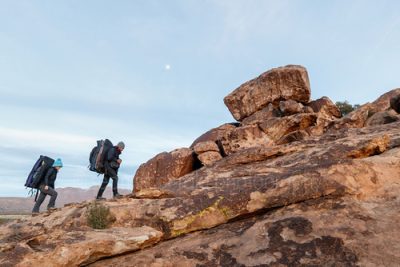