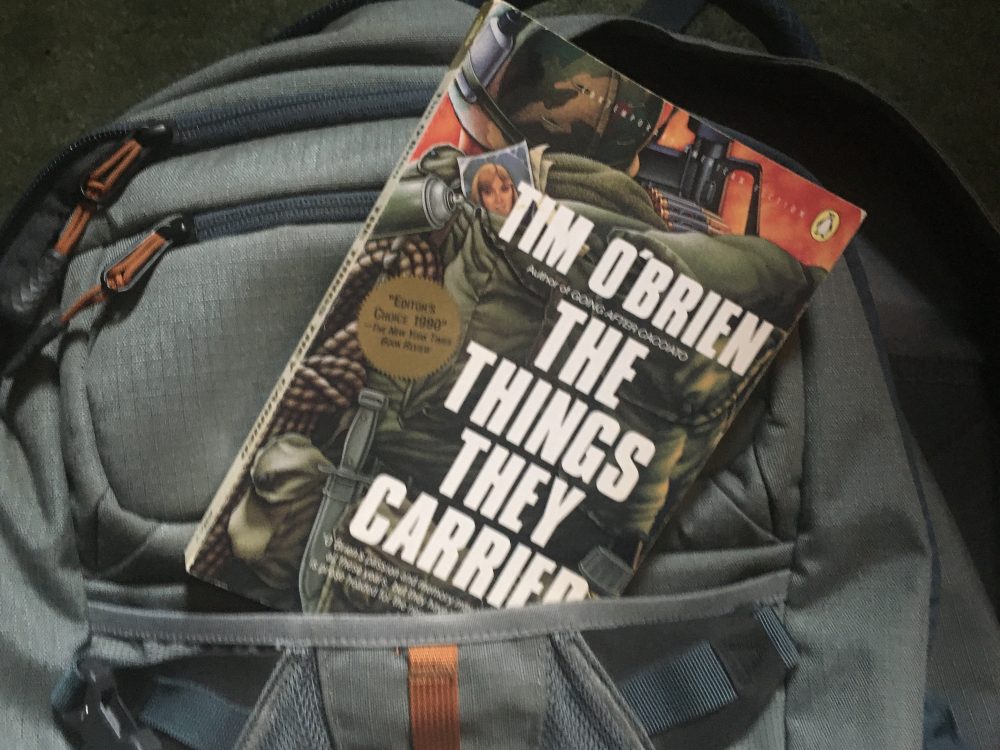 In my junior year of college, I took a literature of war class. I’d been drawn in by the late-80s/early-90s Vietnam movies, Oliver Stone and Stanley Kubrick, and “war” sounded exciting, high drama. I didn’t know the class would be all boys, but that was a nice bonus. We read “The Things We Carried,” by Tim O’Brien, and I was sunk. I’d never read a book like this. Was it memoir? Was it fiction? The protagonist’s name was Tim O’Brien, but the author kept moving the goal posts, writing in a way that it couldn’t possibly be true. (Or could it?) The book had style, swagger, tragedy, danger, the book had all the things. The title chapter that opens the book lists the physical items carried by a 17-member troop marching through the swamps of Vietnam, the flashlights and the pocketknives and the letters from home and the dope, but the story moves outward, toward the emotional burden of that phrase, the things they carried. The following passage was taken at random, it comes from a part where the narrator is describing the awful experience of checking tunnels.

“How you found yourself worrying about odd things: Will your flashlight go dead? Do rats carry rabies? If you screamed, how far would the sound carry? Would your buddies hear it? Would they have the courage to drag you out? In some respects, though not many, the waiting was worse than the tunnel itself. Imagination was a killer.”

The writing had a you-are-there quality that rocked me. I was a girl, I lived in the slacker Valhalla of Nineties Austin, I was 20 years old wearing ripped jeans and a giant flannel shirt, but there I was in the jungles of Southeast Asia, lowering myself into the muck to slither inside that tunnel. When I watched war movies, I often wondered how I’d fare in battle. Maybe it’s silly, I would never go to war, but I couldn’t help being curious: Would I be brave? Would I be foolish? Would I be a coward? It’s a reasonable question. When the world tests me, who will I be? And O’Brien’s story was a complicated answer, it suggested that for many people, or for him anyway, the answer would be all of the above.

I dove into war literature after that. “Catch-22,” “Slaughterhouse Five,” Michael Herr’s “Dispatches.” I love them still. Something about the absurdity of war, the valor yes but also the futility of the carnage, created these masterworks of postmodern writing that just rearranged me. They changed the way I read, maybe even how I saw the world. I could never look at a tunnel the same way after that.