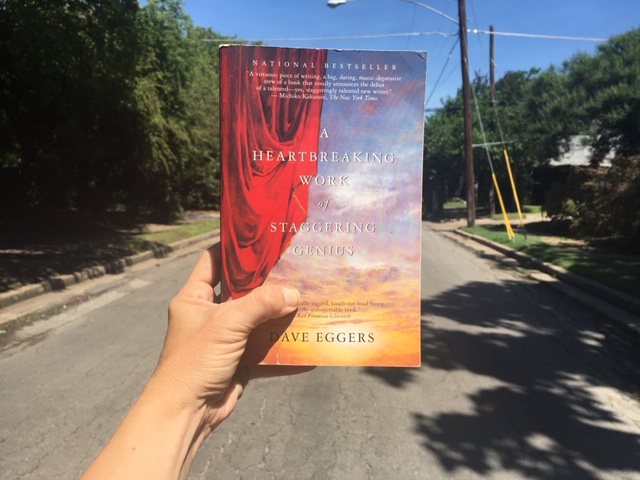 Gather round, young Snapchat and TikTok fans, and attend the tale of GEN X IRONY. The year was 2000. We used our phones for talking. Each time you logged on the Internet — which we called the “World Wide Web,” a phrase that was like sprinkling glitter from your palm — the computer made a catastrophic noise, a sound caught between a mechanical clunking and electric guitar screech. Life was hard. Our rock stars were miserable. We had to walk a mile in Birkenstocks just to send a fax.

Into this perilous moment walked the deeply precocious writer Dave Eggers, or as he identified himself on the copyright page of his memoir, David (“Dave”) K. Eggers.

The book was called “A Heartbreaking Work of Staggering Genius.” In case that title didn’t tip you off, this book was clever. Different. The copyright page included such flourishes as the author’s height (5’11”) and Kinsey-scale sexual orientation, which he rated as a 3 out of 10, “1 being perfectly straight and 10 being perfectly gay.” As for his publisher Random House, an imprint you might assume needed no introduction, he had this to say:

“Random House is owned in toto by an absolutely huge German company called Bertelsmann A.G. which owns too many things to count or track. That said, no matter how much money they have or make or control, their influence over the daily lives and hearts of individuals, and thus, like 99 percent of what is done by official people in cities like Washington, or Moscow, or Sao Paulo or Auckland, their effect on the short, fraught lives of human beings who limp around and sleep and dream of flying through bloodstreams, who love the smell of rubber cement and think of space travel while having intercourse, is very very small, and so hardly worth worrying about.”

That was the copyright page. And I was in love.

Dave Effing Eggers. How do I even explain this to you? If you weren’t there. If you didn’t watch this book drop with a lonely whistle from the sky and detonate in the publishing landscape, the plume of mushroom smoke that hung around for years. People loved him. People hated him. Women lined up at readings to pledge their devotion and possibly angle for his sperm. I recall a headline from around that time: “Dave Eggers, No Problem Getting Laid These Days.”

I actually didn’t read the book in the beginning. The hype was unbearable, and I was inclined to take a pass on the Bay Area wunderkind until I stumbled on something he’d posted on the World Wide Web (cue glitter scattering) about the dangers of being a critic — not a professional critic so much as an armchair critic, someone who slumped on their couch in a torn shirt covered in Dorito dust and the shame of not trying, someone who sneered at others as they tripped and fell. (In other words, Twitter.) The post rocketed around the Internet in a way we now call viral and made its way to me, where I printed it out at the office of the cool alternative newspaper where I worked. I neatly folded the pages and carried them in my wallet for the next, oh I dunno, three or four years. I’d just never read anyone who could capture the mind’s voice in all its rumbling glory. The velocity of the prose. The familiarity of the struggle. Even the punctuation was riveting. It was just! So! Sincere — but also? (Maybe.) Sarcastic?

Yesterday, I pulled the book off my shelf where it has lived for many years. This is not a book I re-read. It is a time capsule. It is the year 2000, it is me at twenty-five, it is the world before the Internet swallowed us. I cracked the spine, and I found myself delighted by the author’s cleverness, then exasperated. Was this book ever going to start? There were rules and suggestions for enjoyment (“many of you might want to skip much of the middle, namely pages 239-351”), there was a preface and (because it was the paperback) a preface to the preface, pages upon pages of pirouetting and throat clearing and random shoutouts (“The author would like to acknowledge the brave men and women serving in the United States Armed Forces. He wishes them well, and hopes they come home soon. That is, if they want to.”) There was a contest for readers to send in a picture of their book being rubbed against by a red panda (“the lesser panda”). It was maddening. It was genius. The longest BuzzFeed listicle written by the most exasperating New Yorker contributor and etched in a soothing font on the side of a grain of rice. And yes I was still in love, because I wanted to throw the thing against the wall, which is obviously an act of passion. That’s how much I cared.

Oh, plot. The book is about the death of Eggers’ parents six months apart from each other, and how he raised his younger brother. I read it in one long gulp, similar to how it was written. The book also follows Eggers’ struggle to start a magazine called Might, which (this part isn’t in the book) eventually became a literary journal called McSweeney’s, which became a website and publishing imprint and later hatched a nonprofit writing program for kids called 826, which was also (briefly? always?) a pirate store, which I once visited. The pirate store had an antique curio cabinet vibe. I bought a tiny glass bottle, the kind you might toss into ocean waves, and inside was a curled slip of paper where someone had written, in pencil, “Thanks for finding me.”

This book changed my life. I guess you had to be there.