A few months ago, I was writing short posts on my favorite books, and then I stopped. It was late May, I was halfway through the list, which I’d begun thanks to one of those Facebook tag-a-friend schemes, the modern chain letter, and though I usually ignore those directives, I’d reasoned this one might be a bit of pandemic fun. I’d already taken a picture for my #6 choice, the David Foster Wallace essay collection A Supposedly Fun Thing I’ll Never Do Again, when the George Floyd video hit, followed by the chaos of the summer. I didn’t feel like writing anything.

Rallies, protests, riots.  One Saturday morning, I woke up to news that a historic department store had been looted, which turned out to be a shard in a much larger fracture: Smashed glass across downtown, but also many major cities. Trying to figure out what happened over Twitter felt like sitting behind a very tall person in a theater, and I kept craning my neck to the right and to the left, but I could not get a full view.

Frustrated, I drove downtown to see for myself, thinking I’d stay for a minutes; I spent six hours talking to people. Store owners, passersby, cops, construction workers hired to board up windows. I didn’t know if I was writing something, or just curious — this is often true about me — but I liked feeling part of a community. Volunteers walked down the street with brooms and dustpans, moving from one wreckage site to the next. I tried to engage one of them. “How did you learn about this?” I asked, and he shrugged and held up his phone. He was young, and looked vaguely hungover (he was wearing pajama pants), and did not seem terribly interested in speaking with a journalist, or a nosy person, or whatever I turned out to be, but I was moved by his small gesture of good will. He lived in the area, he said, and just decided to come help. All across the country people were waking up to stories of broken storefronts and uncontainable rage, but also true was that all over the country, people like this man were grabbing a broom and walking out their front door. 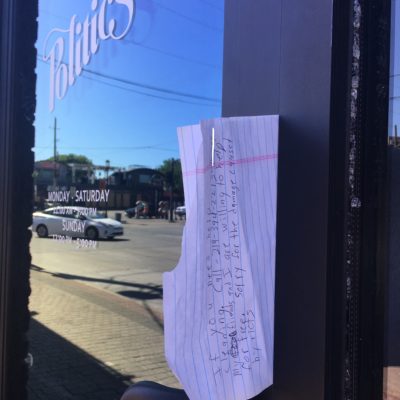 I saw this note tucked in the door of an emptied store in downtown Dallas  called Sneaker Politics. It reads: “If you need help cleaning call [phone number] My friends and I are willing to help for free. Sorry about the damage caused by riots.”

There are moments when you sense how much you don’t know, and the summer of 2020 was like that for me. Destabilizing is the word. I read books. I listened to a million podcasts. I had so many “deep-dive stories” open on my laptop — about American history, race, society, policing — that I felt like I was in grad school. But I did not write much.

I did write some things. I wrote a magazine story about Uncertain, Texas, a small and mysterious town on the border of Louisiana that is home to the hauntingly beautiful Caddo Lake. I wrote about the Bonnie and Clyde legacy in Dallas, a dark episode in the city’s past that struck me as both wildly glorified and largely forgotten. I worked on the book I’ve been working on for some time. But the daily and casual act of tossing out words, especially on social media — I just didn’t do it. I wasn’t sure what to say. Stories felt stuck inside me. Every once in a while I came across the photo on my camera roll taken for the #6 entry in the book countdown — a picture of A Supposedly Fun Thing I’ll Never Do Again nestled in my freezer — but now the photo struck me as posturing and self-consciously clever, two qualities I mistrust in myself. 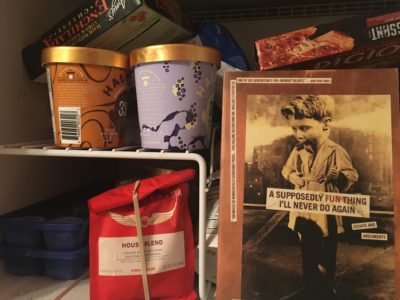 A supposedly fun idea (but I do recommend the Halo Top, lightly melted).

I was starting to doubt so many things. I’d find myself staring out the windows of my sun-dappled kitchen into leafy oak trees of the neighbor’s back yard, thinking:

It was a long summer.

I took up gardening. Late in the afternoon, when my brain had turned to sludge, I went into the front yard that had remained untouched since I arrived several years ago, and I raked leaves and pulled up weeds. Some of the weeds turned out to be long deep vines that stretched across the yard, and I would tug in one place and sense the ground yield to my command, rippling across the earth as I yanked the stubborn thing from its roots like I was pulling up a buried cable wire. (I did that once, too.) I tugged and pulled and yanked and twisted. An act of editing done on the earth. I was nearly sad when the weeding was finished, and the plants were tucked into their beds, but I kneaded the ground around them with with soil and fertilizer, careful not to displace our earth worm friends, who occasionally bobbed up to the surface, grayish and trembling, startled into a ball by the abrupt change. I watered my plants every morning, and that was too often. (I turned out to be the gardening version of helicopter mom. This does not surprise me.) But in time I found something closer to balance, and despite my fumbling, the yard grew enchanting. Some nights I stepped outside and stood on the pathway and stared up at the moon in the sky. Voluminous, mysterious, hiding, but always there.

It’s October now. Dallas is cool and breezy and the mornings have that shiver that has always signaled a new beginning. Fall feels like possibility. I have worn a sweater several times, I have clicked on my gas heater twice already, and I would like to start writing on this blog again, though I don’t want to write any more about my favorite books. (In case you were wondering, the books I haven’t included are Slouching Toward Bethlehem by Joan Didion, Tiny Beautiful Things by Cheryl Strayed, Lonesome Dove by Larry McMurtry, and Underworld by Don DeLillo, which were only in that order because that’s the way I found them.)

I have learned when you are stuck as a writer, the best way out is through. You have to write more, not less. The more you futz and fiddle, the more you suffer, the less you write, and lately I’ve been in futz-and-fiddle mode. Yesterday I wrote a list of writing prompts on slips of yellow legal pad and placed them in a glass jar in my kitchen to draw from in order to try to get myself going again. Fall has always been my favorite season. In the mornings when I’m taking a break, I stand in the doorway and stare out at the dried and mottled leaves that have given up in their clinging and fluttered to the ground. There is something so encouraging in the transformation. Not because things are dying. Because they are always changing.